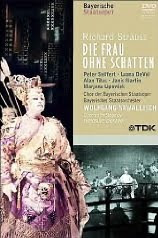 I think we all need help understanding Richard Strauss' The Woman without a Shadow, libretto by Hugo von  Hofmannsthal. We're clear that there are going to be lighting tricks, first showing that the magical Empress casts no shadow, then that the Dyer's Wife has sold hers. It needs to disappear, then reappear. It's an opera about lighting.

There are gods (Emperor and Empress) and mortals (Dyer and Wife). There is a magical falcon and miscellaneous mysterious summonings by the sorceress Nurse. The Empress and her beloved Emperor are doomed if she does not acquire a shadow, symbol of her missing fertility. The Nurse proposes that she bribe the Dyer's Wife to part with hers. She doesn't seem too happy with the idea of marriage and might make an easy target.

Hitler needed women to reproduce to replace all the Germans dying at the front. The way it worked here was as soon as the war was over everyone went out and had babies in celebration of life. I think it works best to first stop having war before having babies. I digress.

This is an unusual opera for both Strauss and  Hofmannsthal. The poetic style is formal and symbolic instead of romantic and sweet, as is usually the case with these two. The music is also quite unusual. There are two heavy sopranos, two dramatic though not quite screamer roles: Empress and Dyer's Wife. The Empress is the more lyrical of the two. It is possibly Strauss's most Wagnerian score, heavy and at times pompous.

So the Bayerischen Staatsoper has created a Kabuki production in conjunction with the Japanese director Ennosuke Ichikawa. It clarifies the status of the characters and the meaning of the drama beautifully. The formality of Kabuki is very suitable to both the drama and the music. The falcon in particular is lovely. The simplicity and formality of Kubuki offset the pomposity of the ending without lessening the effect.

It all boils down to a complex drama about a pissed young woman (Dyer's Wife) who does not care for the way her new husband takes her for granted. She is determined to get back at him one way or another. I think when he threatens to kill her because she can't have children, this turns her on a bit, and she relents. If he's willing to murder her, perhaps he loves her after all. It's probably the best role, sung here beautifully by Janis Martin. The Empress takes a higher road and earns her shadow because she refuses to take someone else's.

The Emperor is Peter Seiffert, recently seen in Tannhaeuser. Luana DeVol is the Empress. Both DeVol and Martin are California girls.

On my small TV the picture is hard to see and there are no closeups. Maybe your TV is bigger.
#ad