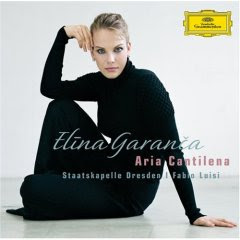 Elīna Garanča is featured on this recording called "Aria Cantilena", after a track by Heitor Villa-Lobos. This is DG who seem to spare no expense producing really high class recordings.

The penultimate track is perhaps one of the best performances of the Trio from Der Rosenkavalier that I have ever heard. Real reviewers would be able to tell you why. Everyone is in tune for one thing. This isn't the sort of thing one is supposed to say. It is beautifully clean and arches through the phrases throughout, instead plodding in a confused way through the middle and pulling itself together at the end, as is usually the case.

The variety of music here is impressive. Massenet, Mozart, Rossini, Villa-Lobos, Offenbach, etc. Her Rossini is quite good. She has the kind of lush voice that will almost guarantee you a career and is obviously a good musician. If she is to be criticized, it is for her northern, somewhat introverted personality. You're a success. Relax and enjoy it.

I think she is one of the best mezzos around, with a round but not excessively heavy tone. I have also listened to quite a lot of the Baden Baden Gala with Anna Netrebko and think their voices blend remarkably well. They should do a duets album. I know Elina does not want to be caught up in the Netrebko publicity mill, but she should not use this as an excuse to avoid the obvious.

This recording is recommended.
#ad