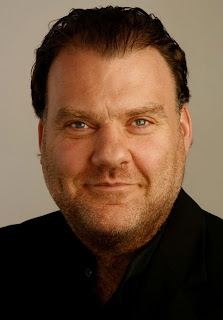 Berkeley audiences are so cool. If they like someone, they let them know. The audience at Zellerbach last night liked Bryn Terfel and his accompanist Malcolm Martineau. There was a sense of informality that fits Berkeley. Someone in the front row was coughing so Bryn Terfel went off stage and brought them out a glass of water. Why doesn't anyone sell cough drops in the lobby?

Then later he performed a Gilbert and Sullivan piece "The Ghosts' High Noon" where exclamations from somebody interrupt the person singing (Bryn). The exclamations came at first from the pianist, I think, but later people in the audience were doing it, too. If this description makes no sense, I apologize. It was all very silly and a bit chaotic. And fun.

We are still in the Schumann bicentennial year so he devoted the whole first half of the program to him, including "Belsatzar," all of Liederkreis, and "Die beiden Grenadiere." The first and last of these are pieces preferred by baritones. It was all very nice. The half closed with "Mein Wagen rollet langsam" which was included as an excuse for more silliness. The piece has singing for only a brief minute or two and then continues on with a seemingly endless postlude on the piano. Only Schumann would compose such a thing. Maybe it's supposed to be an aural description of the Wagen rolling langsam. Bryn lumbered off into the wings and peeked out every now and then to see if the piece was still going on.

After intermission was a group by someone named Gerald Finzi on texts by Shakespeare. The tunes weren't particularly catchy and will certainly not make me forget Schubert's "Who is Sylvia." Then Ibert songs about Don Quichotte in French.

Bryn interprets with his own personal style which, of course, makes him more rather than less interesting. My son decided not to go, which is probably a good thing. He would have bored me with stuff about how it's actually supposed to go. If you can pull it off, I'm good with the idea of completely tossing conventional interpretations.

Which brings us to a group of five songs from the repertoire of the Welsh-American baritone John Charles Thomas. Please remember, I am not doing journalism. Two of the five songs were pieces that I sang in my youth. I can still remember all the words to "Trees" and will complain that Bryn did not. He faked it extremely well, though. I loved this kind of kitsch. He ended the group with a very sincere and respectful rendition of Malotte's "The Lord's Prayer." I cried. Great pouring drops. Love can simply not be explained.

What is one to do? He is such an amazing amalgam of charisma, voice and style that one would wish to forgive him anything. If he doesn't really want to sing Wotan, he should simply not do it.
Posted by Dr.B at 5:01 PM

I guess you don't know me very well. There is no right way in a performance. There is only internal integrity. Every performance is its own universe made up of the music, the performers and most importantly the audience. It either works or it doesn't.

The reason that I love the original instruments movement has very little to do with their instruments. They play with fire.

Right now I'm deep into Handel's Concerti Grossi, specifically two recordings, one by the British Avison Ensemble, and the other by the Italian Il Giardino Armonico. Both are original instruments. They could not be more radically different. Each is wonderful, because they have their own internal logic beyond the printed music. The British is reserved and elegant. The Italian is Italian.

Another good example is Nigel Kennedy. His performances of Vivaldi break every rule. He stamps his feet and has the orchestra crying out 'oi!' and it's completely insane and also very wonderful.

It's show business. Everything else is bullshit.

I was there and Bryn was great. Yes, he had some gaffs at the end but those were with songs that were not technically on the program.

I was with a couple of people who were not very familiar with Bryn over even classical music lovers and he really won them over. What a performer!

Forgetting some of the words to Trees is not really a serious criticism. There are no prompters in recitals. The review is intended as praise.

And to Chris I must say that he refuses to consider himself a straw man, someone like Phylis Diller's husband or Rodney Dangerfield's wife.