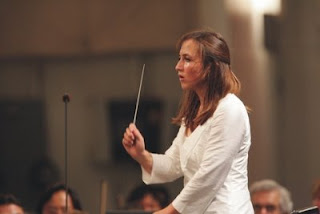 The Berkeley Symphony, which performed last night in Zellerbach, has a new music director since Kent Nagano stepped down from the position in 2009 after 31 years.  Her name is Joana Carneiro and she comes to Berkeley from Lisbon by way of Brazil by way of Paris....  The list gets a little long.  She likes to talk and speaks virtually unaccented Berkeley English.  Welcome.

She talked for a while about Enrico Chapela, a composer from Mexico City whose piece Private Alleles was debuted last night.  The title of the piece refers to genetic studies of the native populations of Mexico.  To quote Wikipedia "His style amalgamates elements of Jazz, Rock and the Latin-American tradition with classical serialist techniques, which often are used in a playful manner."  Playful serialism.  Hmmm.  For my ears he sounds post modern.  It was ok but not at all memorable.  He came up for a bow.

Then she talked about Lorraine Hunt Lieberson whose presence was invoked with a gesture toward the viola section where at one time she was principal viola.  Many still in the orchestra were her friends.  This was part of the introduction to Neruda Songs by Peter Lieberson, a set of five love songs that was written both to and for his wife Lorraine.  If you have not heard them in her voice, you should change that immediately.

It was brave of mezzo Rachel Calloway to take them on in this place where Lorraine is still so well remembered.  I could not help comparing.

Rachel Calloway was also the soloist in de Falla's El amor brujo suite.  Both of these pieces are too low for Rachel's voice, especially El amor brujo where she actually struggled to make the right effect.

The Berkeley Symphony is showing the effects of having a conductor who can spend sufficient time with them to bring out their more wonderful qualities.  It was well programmed, well conducted and well played.