From the Bee: Sacramento Opera Cancels Remainder of Season 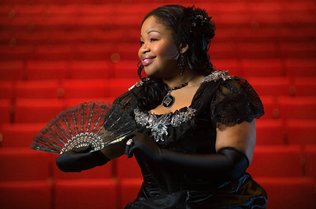 This is Karen Slack in La Traviata.

Citing plunging ticket sales and a budget shortfall, the Sacramento Opera announced Thursday that it is canceling the remainder of its 2011-12 season and laying off all but one member of its staff.

The season cancellation will affect its scheduled plans to present Mozart's "The Magic Flute" in February and the regional premiere of "The Postman Always Rings Twice" in May.

The dire move by the 28-year-old producing company was predicated by a $85,000 shortfall, said Rod Gideons, executive director of the Sacramento Opera.

The company is operating on a $1,144,517 budget this season, and had hoped for strong ticket income from its season-opening production of Handel's "Orlando."

But soft ticket sales – the opera brought in only $108,340 of the $193,500 budgeted to meet expenses – combined with a plunge in subscription ticket sales proved too onerous for the company.
Sacramento Opera derives 65 percent of its income from ticket sales.

Patrons with tickets to the two pending productions will receive refunds. In some cases, the tickets will be honored by the Mondavi Center, Sacramento Philharmonic and other arts groups, Gideons said.
"Looking at it from a business model, the structure we've operated with for the last 30 years is no longer viable," said Michael Nelson, president of the Sacramento Opera board. "Our subscriptions were 30 percent under what we projected at the start of the season. We had started the season with a known gap, and we were trying to close that gap with 'Orlando.' "

Producing opera is one of the most expensive endeavors in the art world – there are actors, musicians, props, sets and costumes. Several opera companies nationwide have canceled seasons recently, including the Cleveland Opera. Some companies have declared bankruptcy or closed their doors altogether.
Earlier this year Sacramento Opera chose not to fill a vacancy in the crucial position of marketing director, and in June it eliminated the position of outreach coordinator. It also cut the number of performances per production from three to two.

Nelson said the company would have had to meet $150,000 worth of single-ticket sales for "The Magic Flute" to avoid adding to its debt.

Meeting that goal for "The Magic Flute" is not an impossibility – it would require filling a majority of the Community Center Theater's 2,380 seats – for a popular opera. But at a meeting Wednesday, the board of directors decided that presenting the rest of the season was too much of a financial risk.
"That 'if,' in this economy, is what proved to be the biggest challenge," said Gideons. "We felt it was critical that we take the bull by the horns."

As a result of Wednesday's meeting, the company laid off conductor Timm Rolek, as well as its development director, subscription ticket manager and one part-time employee. Gideons is the only staff member remaining.

The move also affects many musicians, who perform for the company through an agreement with the Sacramento Philharmonic.

"Those two operas – that was work that we, as musicians, really count on," said tuba player Julian Dixon, who has performed with the Sacramento Opera since 2003. "It's work that, when taken away, really affects us because we've given up other work to commit to the opera schedule."
For a producing company, the cancellation of a season is a drastic move – but a step less severe than filing for bankruptcy protection or shutting down.

"I regret a season cancellation anytime it happens," said Marc Scorca, president and CEO of Opera America, a national service organization for opera. "If the cancellation is done with courtesy to ticket buyers and is the only way to ensure the long-term health of the company, then it's a wise thing to do. I would regret it if it was just a stopgap measure."

Gideons said that suspending the season will allow the company to retool and look to the future. "It will allow us, over the next six months, to envision a new direction for the company," he said.

Gideons said the company intends to produce next season, and that in the ensuing months it will consider changing its name plus a possible strategic merger or collaboration with another local arts organization.
Gideons did not say which companies he has approached but confirmed that talks are under way. One of the companies may likely be the Sacramento Philharmonic.

"The Philharmonic would welcome that discussion," said its executive director, Marc Feldman.