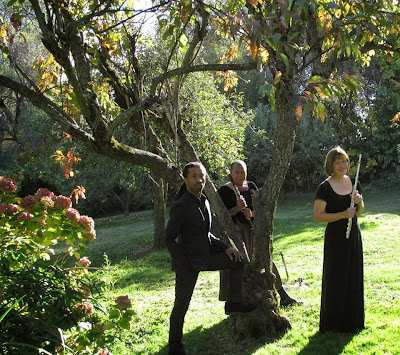 You will undoubtedly ask yourself, "How much music can there be for flute, clarinet and baritone?" Which reminds me of the time long ago when I used to copy the complete works listings from the Groves Dictionary of Music. Looking over these it was amazing how many obscure chamber works there are. They may have to search, but there will be stuff.

From standard repertoire they found Heitor Villa-Lobos (1887-1959) Choros No. 2 and Fantasy by Malcolm Arnold (1921-2006), both for flute and clarinet. There was even a set of five movements called Street-Wise Duos by Terry Kenny (1931-), British and still living, I think. These were fun and close to pop music.

Adding the baritone came from self-generated material. Singers sing mostly with keyboards. There were three spirituals arranged by Omari Tau: "Give Me Jesus", "Good News", and "De Gospel Train." These were also fun but didn't quite swing enough for me.

The most amazing thing on the program was Deborah Pittman's arrangement of the Bach/Gounod "Ave Maria" for alto flute, Native American flute and baritone. I promise you will not have guessed what this turned out to be. It was very Bobby McFerrin. The flutes played the melody and Omari Tau sang the arpeggios from the Bach prelude. Bravo.

I have heard that this is the direction of classical music in the 21st century. Make something new from the old materials. Surprise us. "De Gospel Train" was done as a true encore.
Posted by Dr.B at 2:36 PM