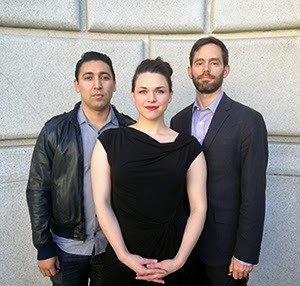 Saturday night, day of the Chinese new years parade, I drove to San Francisco to see Donizetti's Rita, subtitled the Beaten Husband (1841). This is a buffa for three characters by Gaetano Donizetti.  They are

Rita is a domestic abuse plot.  At the beginning Rita is with Beppe.  They wake up in the morning, and he immediately begins to give her a pedicure, done with one of her legs on each of his shoulders.  He puts in the spacers and paints on the color while she sings an aria.  The second abuse incident is when she burns his face with a hot iron.  Caution!  No tenors were harmed in the playing of this opera.

Then her ex husband Gasparo shows up.  They are only ex because Rita and Gasparo each think that the other is dead.  Gasparo is back to find the marriage certificate so he can destroy it and marry a rich Canadian woman.  Beppe and Gasparo fight in slow motion so no one will hurt the other.  Cute.

The singing was in Italian and the dialog was in English.  Two of the singers are current Adler Fellows and Thomas Glenn is a past Adler Fellow.  Thomas is a very funny guy, and all three were fun to watch and listen to.

This was presented by the New Century Chamber Orchestra led by Nadja Salerno-Sonnenberg.  Nadja is famous for behaving like a normal person in her performances.  In the classical world this is considered remarkable.  She is an exciting player and coaxes the same kind of emotional involvement from her fellow players.

In the first half of the program they played:

I detected no coordination problems with the singers facing the audience most of the time and Nadja conducting the orchestra at the back of the stage.  I enjoyed it very much and can add this opera to my list.
Posted by Dr.B at 9:22 PM