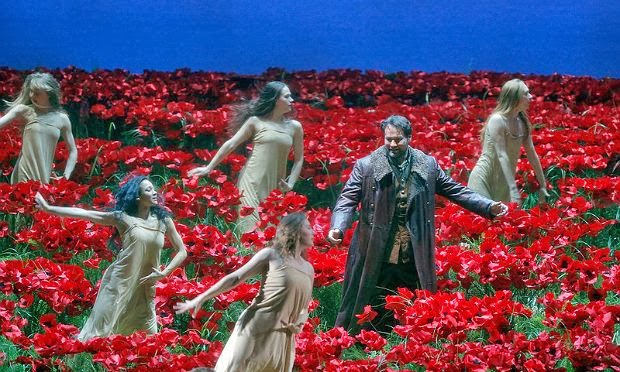 My list says that I have seen Alexander Borodin's Prince Igor at the San Francisco Opera in 1996.  I don't remember.  There has been a massive effort to improve the theatrical viability of this opera and to alter the score to include only music by Borodin.

Traditionally the scenes are:

I am looking at the program for this performance live from the Metropolitan Opera in HD and it seems to be incorrect.  I will attempt to explain what happens.  The Prologue is as before, but it is followed by the scene of singing and dancing in the Polovtsian camp.  This is the famous Polovtsian dances and takes place in a field of red poppies.  It is Igor's reality and fantasy mixed.  The enemy general and his daughter are introduced, and she falls in love with Vladimir.

Then there is a scene where Ovlur tries to persuade Igor and Vladimir to escape, but Vladimir stays for Konchakovna.  This is Act III above, but does not appear in the handout. In the end Igor returns to a ruined city and encourages rebuilding.

I felt that these changes were successful, that a level of theatricality had been achieved and that Igor became central.  The choral work in this opera is spectacular.  But in either arrangement bad guys always seem to have more charisma, and Prince Galitsky is wonderfully nasty.

The singing was particularly enjoyable.  I especially liked Oksana Dyka and Anita Rachvelishvili, next season's Carmen.  Her Carmen will be wild.

Dmitri Tcherniakov talks about his production and what it means.  He tells that Igor has had a transforming experience, that he immediately starts in to reconstruct his land, that he wishes to turn his attention to peaceful, constructive purposes, but when we see the dialog on the screen we know that this isn't what he is saying.  He wants to go back to fighting.  This is why the audience is confused.  I don't think this opera will make it into standard repertoire.

P.S.  All my reviews are a work in progress.  After the Oscars I want to point out the original field of red poppies:  the Wizard of Oz.  Of course, these are California poppies.