Cecilia Bartoli: "My religion is my work" 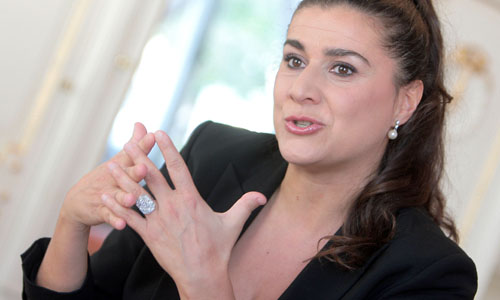 [An interview from Crescendo.]

Cecilia Bartoli receives for the eleventh time an Echo Klassik award. A conversation about her career, the church and the importance of such awards.

Ms. Bartoli, again you will also be awarded a 2013 ECHO Klassik ... for the eleventh time!
Yes! For my recording "Mission" with the music of Agostino Steffani, for which Donna Leon wrote her novel "Heavenly Jewels." I am very happy because this project was very close to my heart. Steffani's music has for me transcendental elements, love, hate, death, life, everything is possible, everything is incredibly exciting.

So exciting that you are now following it up with a second Steffani CD with his "Stabat Mater" and other sacred works.
Steffani's "Stabat Mater" was his last work, he composed it shortly before his death in February 1728. At that time he lived totally impoverished in Frankfurt, where he died ... ...

After a dazzling life as a diplomat, a spy in the service of the Vatican, as evangelizing clergyman, abbot and bishop, as genius composer who was musically "plagiarized" even by Handel. But in the end were left only two boxes of documents that are so far hoarded by the Vatican.
Yes. For me it was interesting to show that he was a very important composer. I wanted to explore it and present it to the public, sung always alongside the Stabat Mater by Pergolesi, by A. Scarlatti, Caldara ...

Did you ever come close to the boxes?
We did not have to, yes. We had other sources, such as the Fitzwilliam manuscript, which is located in Cambridge.

I ask, because one knows that another concert with you did not happen in the Vatican based on the fact that you refused to publicly take a position on the subject of abortion ...
Yes, that was strange. An opinion is something absolutely private. But I believe that the new pope is  somewhat more tolerant.  Somewhat more optimistic and more creative. And if the Vatican does not need my recording, yet the music market will: they certainly need Steffani's church music.

Are you a believer?
Let's put it this way: When I hear the music of Mozart, Bach's or Monteverdi's or Steffani's, then I believe. My religion is my work. [Many musicians feel this. ]

What did your parents do wrong? Ultimately, you grew up in Rome, near the Vatican.
(Laughs ) Yes, and I could look into some windows. In Rome there are more churches than houses. And then you can imagine what attitude one adopts opposite this. On the other hand, I am impressed by the Vatican. It is the strictest political order I know. Look: We have in Italy so many parties, so many political conflicts, so many radical changes. But the Vatican has survived centuries. This is really amazing.

And there are really a lot of opera materials there!
And such great ones!

Back to Stabat Mater: why has this anonymous medieval poem that sings of the sufferings of the Mother of God for her crucified Son inspired so many composers? From Josquin and Palestrina, past Vivaldi finally to Wolfgang Rihm [1952-].
It is perhaps the pain, the suffering of Mary, that has so attracted and emotionally moved composers. Stabat mater dolorosa is yes (Latin) for "The mother stands full of pain." What could be nicer than to create music for a text that already affects you when you read it?

Steffani setting was 1727, the same year as Vivaldi's Stabat Mater and four years after Scarlatti and nine years before the famous Stabat Mater by Pergolesi. Is this a coincidence?
1727 Stabat Mater had been reinstated in the service, yes. For what reason it was banned from the liturgy in the 16th Century for over two centuries, I do not know. [At the Council of Trent counter-reformation a very large number of sequences, the type of poem of the Stabat Mater, were banned.]   Of course in musical style there are major differences between the works. Steffani described his Stabat Mater as his masterpiece. Yes, it is. Steffani gives the choir a very large space, and integrates the voices. It is a polyphonic structured, magnificent work. Steffani is here quite different from Pergolesi who set the poem to music that is operatic, arias and so on. On the CD we present other sacred works by Steffani.

What?
The cantata for soprano solo "Non plus me ligate", which is cheerful, a different mood than the Stabat Mater. Also two four-part choral pieces, "Beatus vir" and "Triduanas a Domino", which Steffani composed for St. Cecilia's on 22 November; as well as the spiritual concerto "Laudate Pueri" and the five-part "sperate in Deo". All these works we present for the first time on CD as a premiere. Fabulous young singers such as Nuria Rial, Franco Fagioli or Julian Prégardien and others are also there. Steffani was very young when he composed this music, 1667-1688, when he was employed at the Catholic court in Munich. Later he was sent to the Protestant north of Germany to convert the people there to the Catholic faith. If it was the Vatican who sent him we do not know.

Back to your ECHO Klassik. What do awards actually mean to you?
You mean a recognition of my work, which not only very much satisfies me but also the people who come to my concerts and buy my CDs. This work is so important for my soul. When I touch people with my music, then I feel fulfilled. It gives me strength to continue to explore new things. You see the day differently when you dedicate yourself to a new composer, a new work.

Do you even know how many awards you have won and where you store them?
(Laughter) Oh, they're scattered all over my house. I think I would not find them all right away. Because I have not ordered them in a cabinet, so I cannot watch them all day and admire. So I need them not to get dusty. And some trophies are also quite heavy.

For Max Reger order meant "contamination of the button hole" ...
(Laughs) You see my jacket has only one button ... In fact, in Italy there are some that look like a cleaned up Christmas tree, who walk around with a breast swollen with pride, and no one knows what is all this order, and no one cares there. This is really funny.

1994 you got your first Echo Klassik for a CD with songs by Beethoven, Schubert, Mozart. What has happened since then?
Since then, of course, a lot has changed: the transition from vinyl disc to the CD about in the mid-eighties, for example, has produced many CDs - not always of the highest quality. Today we have almost an overdose of CDs.

But you have always managed to "reinvent" yourself, are among the few stars who are not comfortable to always use the same repertoire, but gain attention with your recordings even after twenty years.
I was always searching ... And still am ...

Your repertoire ranges from Handel, Vivaldi to Rossini, to Bellini, Pergolesi, Puccini, Donizetti, to Halévy, Mozart, Gluck, Haydn included.
The contrasting repertoire revived my spirit, lit me afire. Currently I have developed a musical vision for Bellini's "Norma", they try from the context of their time to understand about 1831 - with the instruments of the time, the other vocalization. It makes a difference whether the introduction to Norma's famous cavatina "Casta diva" is played with a wooden flute or a modern instrument made of metal, and if I approach the whole thing like a prayer in the piano, pianissimo or as a show in front of a giant room with four thousand people.

Where does a musician find the true recognition? Is applause a parameter?
Yes and no. You can sometimes get a lot of applause very fast because you put on a good show, a favorite aria of the audience. The most beautiful is the silence when you literally can hear a pin drop on the floor in a room with two thousand people. Then I feel like I have with my singing pierced into the souls of men.

"What pleased me most," wrote Wolfgang Amadeus Mozart about a performance of The Magic Flute, "was the silent applause."
Yes, that 's it! If it comes from within.

And one last quote again from Reger: "The more they attack my title, the more my simple name grows. It will remain nothing but: Max Reger" ...
Yes, a composer says that. And what should an artist say? I can only say that I hope that at the end of my life my name is still written correctly.

DrB, do you know this one? I love it very much: Chrismon interview

I should do that one, too.