Cavalleria Rusticana and I Pagliacci in HD 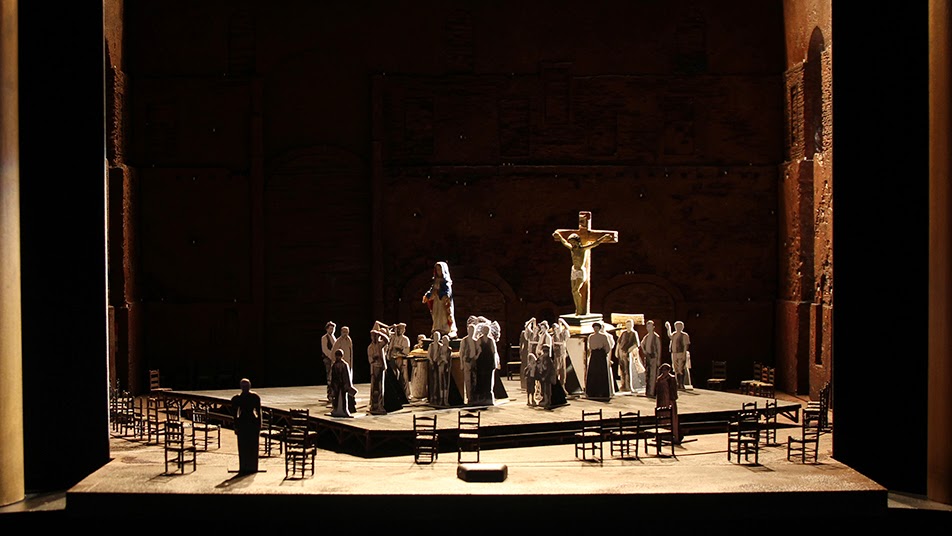 The final HD from the Metropolitan Opera for this season was a new production of Pietro Mascagni's Cavalleria Rusticana and Ruggero Leoncavallo's I Pagliacci.

It might probably have been a good idea for me to wait to watch the Salzburg film until after this one.  Though in black and white, the Salzburg production was far more visually interesting.  I chose the above picture as the most colorful from the Met's Cavalleria.

I seldom say this so here goes:  The Met Orchestra was absolutely fabulous in both operas.  I know they are supposed to be... but I don't generally have this reaction.  Luisi must get a big piece of the credit. This is a very beautiful opera, and Luisi brought exactly the right feeling to it,  This cannot be said of Thielemann in Salzburg who could have been conducting Strauss.

It is impossible not to compare the two performances.  And there is much to contrast.  The Salzburg performance was beautiful and dignified.  Everyone is dressed for Easter.  Santuzza and Turiddu have a child who is an altar boy.  Mamma Lucia is the most northern Italian mother I've ever seen.  It was unbelievably restrained.

The Met performance despite its extreme low-stimulus production was the right one for Marcelo Alvarez.  His mother is very much the warm Italian mother.  Lola's husband is a tough.  I'm not sure about Eva-Maria Westbroek.  Sing something a bit lighter. 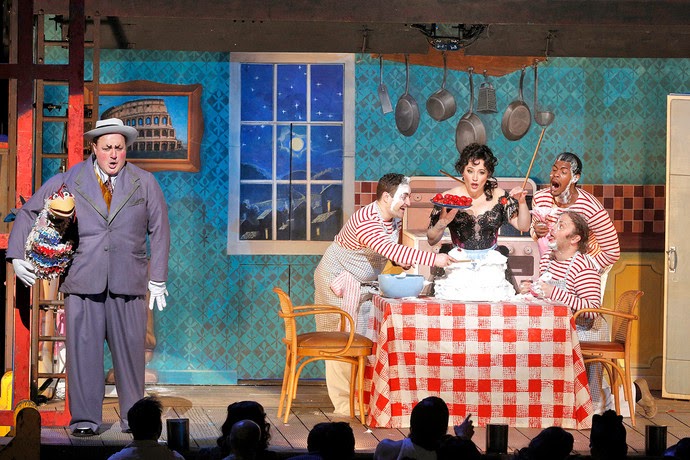 Pet peeve out of the way--venti-tre ore means twenty-three oclock or 11 pm, not sunset or whatever other goofy times appear in the translations for this.  They have siesta in these places.

I enjoyed very much Susan Graham's interview with Patricia Racette in the intermission.  Racette informed us that Nedda is much closer to her real personality than the parts she generally plays.  She bragged about riding in on a horse with no hands, but she forgot to mention she was side-saddle with no hands.  She was by far the funniest Nedda I have ever seen.  We already knew she could do anything, but now we know that anything includes riding horses, dancing, doing slapstick comedy, and covering the emotional gamut in a single opera.

Tonio in the picture above is using the chicken (duck?) as a ventriloquist dummy.  He sang an excellent prolog.

This is the perfect opera for Marcelo Álvarez whom I sincerely doubt is as serious as his character here.  When he needs the big emotions, he rises to the occasion.

I hope you enjoyed this as much as I did.

Footnote.  Some one in our audience asked me what "toi" was, and I said it is "toi, toi, toi," means nothing in particular and is said instead of "break a leg" for good luck.  At this point in life I treasure the first time it was said to me.

If there's a better mature tenor these days than Alvarez on U.S. stages, I can't imagine who that is. The only Pagliacci I've ever seen to top him here was Pavarotti with Stratas and Pons at the Met many years ago (it's on DVD). I miss seeing Dwayne Croft as Silvio, though, as this one wasn't particularly good.

BTW, Racette DID mention riding in sidesaddle, but Graham talked over her just as she said it, which is probably why you missed it.

I was glad to see the summer "reruns" will include "The Merry Widow." My wife and I missed that one because we were just coming back from our three-week trip to Egypt and Israel.

Kaufmann for Cav, Alvarez for Pag.