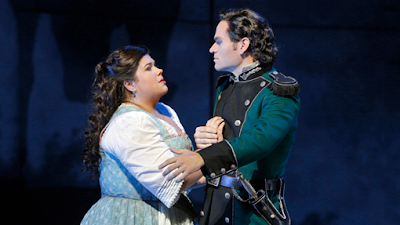 I wish I liked Verdi's Luisa Miller, presented last night at the San Francisco Opera, but how can you like an opera where everyone is a shit?  The following rant has been curtailed as much as possible.

You know as well as I do that members of the ruling class are never permitted to marry commoners.  Absolutely not permitted.  The commoners also know this.  So Rodolfo goes sneaking around among the peasants disguised as one of them trying to pick up girls.  When the Duke in Rigoletto does the same thing, you know exactly what kind of a shit he is.

Rodolfo's father, Count Walter, wants him to marry Federica, a royal who is exactly the sort of person he should marry and would be permitted to marry.   She is OK.  Rodolfo threatens to tell that his father has murdered his uncle to become Count.  What a pair of jerks.

Count Walter has a sidekick named Wurm, which everyone knows is worm in German.  He is in love with Luisa, but instead of being sweet and respectful to her in an attempt to woo her, he drags her father off to jail.  He is a worm as well as a shit.

In order to get her father (he seems OK though nothing too great) out of jail Luisa writes a note saying she has never loved Rodolfo.  Rodolfo responds to this by poisoning her.

This is simply too many shits for one plot for me.  One prefers the bad guy to be just one baritone instead of two baritones and a tenor.  Verdi doesn't seem to be any too inspired by them either.  There are no hit tunes.  Go see Nabucco or Macbeth instead.  I sincerely apologize if you happen to like this opera.

The above is not a performance review.  You would want this for the singing.  Michael Fabiano is developing into a truly fabulous Verdi tenor with a gorgeous, even thrilling tone, though one can't help wishing he would sing something one liked.

Leah Crocetto is still someone I like very much with a big beautiful dramatic soprano voice full or warmth and intensity.  Could we hear her do a Leonora, perhaps?