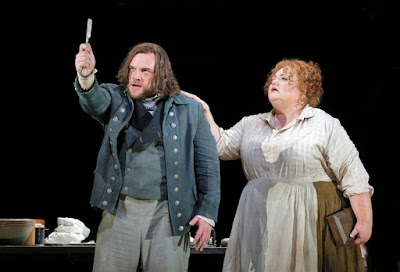 The great performers fund of the San Francisco Opera is accumulating money.  Gerald Finley who was supposed to sing here and Diana Damrau who was supposed to sing Lucia have both cancelled to be replaced by less expensive but still very fine singers.  My Brian Mulligan experiences have included an excellent Valentin in Faust, a very nice Marcello in La Boheme, and a less significant role in last season's magnificent Les Troyens.   He was everything you might want in a Sweeney Todd.  The entire cast is made up of excellent American singers.  The star of the evening was the very distinguished Stephanie Blythe.  Heidi Stober and Elizabeth Futral deserve special mention.

The way you tell what is an opera is by including all musical theater that can be performed by an opera company made up of opera singers and an opera orchestra.  Sondheim's Sweeney Todd qualifies.  This work has only recently seeped into the opera house where it can be heard with supertitles.  The libretto, also by Sondheim, is very wordy, and sung quickly with fake English accents.  Tough.  The real Brits Emma Thompson and Bryn Terfel were much easier to understand.  The most fun part was the section where Todd and Lovett are describing the taste of the pies according to the profession of the victim.

I think this was a Sweeney Todd of very high quality, if you like that sort of thing.  As my fourth viewing, I found that I was growing tired of it.

Editorial comment:  the only excuse for doing a musical instead of real opera would be the filling of the seats.  This did not happen.

I would love to see Stephanie Blythe in Sweeney Todd, or better yet, a production with both her and Bryn Terfel. Hoping this performance gets some sort of DVD or TV release, though I don't know how unlikely that might be.

They produce DVDs every now and then, but it's unpredictable. This plus Bryn would be marvelous indeed.