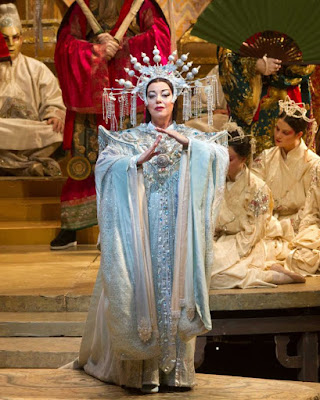 Puccini's Turandot from the Metropolitan Opera is such a familiar old friend that one scarcely knows what new thing one can say.  In contrast with the picture above, Nina seems to have been deliberately made up to look hideous.  Nothing could deter her spectacular performance, however.  Her warmth always shines through.

This time I paid particular attention to the place in the opera where it stops being Puccini.  This happens immediately after Liu dies.  The stage clears and there is an extended love duet which is not by Puccini. It was composed by Franco Alfano.  So this is what the fuss is about.  Puccini would undoubtedly have composed something far more beautiful for this important scene, but the drama takes over.  It's tolerable and that's about it.  The final scene is made up entirely of music heard earlier in the opera.

Anita Hartig as Lui both looked and sang beautifully.  Perhaps the opera is about Liu.

Berti is the only tenor I've ever seen who got no applause at all for "Nessun dorma."  He chopped off his high note.  I'm not a fan.

Over the time that I've been blogging, I have written a lot about Turandot.  I think my favorite performance is still Maria Guleghina in this same production.  I love Nina, but for me Maria completely redefined the role.

I wrote about why Franco Alfano was chosen to write the ending, what the long ending sounded like and why it was shortened here.  I wrote about seeing La Leggenda di Sakùntala by Franco Alfano live in Rome here.  I didn't know at the time that this was a recently rediscovered score.

The only aspect of the opera that I seem never to have discussed is the plot.  Is it disgusting?  Should we hate Calaf?  Look people.  It has to do with princes and princesses.  One desires a princess or prince because she or he is a princess or prince.  Physical beauty is vastly enhanced by power and position.  In the 21st century Prince William is allowed to marry a commoner.  Whatever time you move Turandot to, no one would have considered that.  Father agrees to Turandot's plan only because it includes at least the slim possibility that she will marry a foreign prince and produce an heir.  Prince Calaf would simply never consider marrying Liu.  So get over it.

Why is she gesturing a time out?