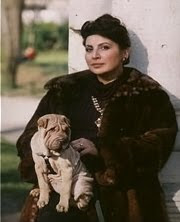 I have seen the Zeffirelli production of Puccini's Turandot from the Metropolitan Opera before: once with Placido Domingo on television and once in the house with Andrea Gruber. It's very beautiful and worth seeing again. I admit to being a little freaked out by the men creeping around the stage, but the rest is gorgeous.

But this is the first time the ice princess has come to life for me. She is terrified of this stranger as she has never been before. When Liu kills herself in order not to reveal the name, Turandot feels this as she has not felt anything before. She feels herself fall in love and the loss of her power with genuine terror. We hear the words "my first tears" as we have never heard them before. This is a deeply emotional Turandot who sees her life crumbling before her eyes. We feel her fall in love. And we see him see her fall. We know as he does that it is safe for him to tell his name, that with this word his triumph is complete.

The Turandot of Maria Guleghina is acted like nothing I have ever seen before. Brava. And the singing was also good.

In the theater often the sound came and went, though not during "Nessun dorma" as I had bet someone, and occasionally the picture went with it. Boo. Pull yourselves together, gang.

The HD surprise, who will host, was really a surprise: Patricia Racette. She has moved up a rung, hopefully due to her fabulous Trittico in San Francisco. She was excellent.

She interviewed Charles Anthony who sang the Emperor. He's been at the Met for over 50 years.

She interviewed members of the brass section because of their recently released CD.

She interviewed Marcello and Maria together and brought out the wonderful rapport between them, part of the explanation for the beauty of this performance.

Let's hope we see her again in this role.
#ad