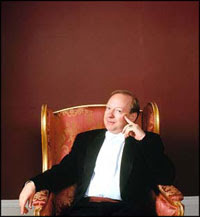 My friend J, who is 88, and I were thinking this was the first time we had ever been to a concert devoted entirely to Henry Purcell (1659-1695). Coming into the Mondavi Center to hear Philharmonia Baroque last night, the usher asked, “What’s his first name?” I said Henry, and another usher said, “That’s spelled ‘H-E-N-R-I.'” Oh heavens no. He’s English, not French.

How can this great composer be so little known? I have always been especially fond of the middle Baroque, that most neglected of all style periods. But thinking about it now, perhaps it is only the great Purcell I am especially fond of.

Nicholas McGegan, the conductor of Philharmonia Baroque, talked before the concert and spoke about the French influence on Purcell – King Charles II was raised in France – and the roughness of English harmony compared to the French. I think it is this roughness that I love, the way the lines bounce against one another, the liveliness of the rhythms, the astounding beauty of the English text setting, never heard before or since.

Purcell is my man. Let’s have an All-Purcell-All-The-Time festival. We would probably be criticized for performing inferior repertoire. [Sorry. This is currently a sore point for me.]

There were questions after the talk, and I wanted to ask, “Why aren’t you famous?” This would have been unfortunate because McGegan probably already regards himself as famous.

The first half of the program was devoted to an instrumental piece called Chacony, a couple of anthems and a fascinating Suite from Abdelazer, or The Moor’s Revenge. These are isolated movements to be played between scenes of a play. In the center is the text:

Lucinda is bewitching fair.
All o’er engaging is her Air.

In ev’ry Song Lucinda’s Fam’d.
She is the Queen of Love proclaimed.
To all she does a Flame impart
Expiring Victims feel her Dart.

Strephon for her has Love expressed,
Philander sighs too with the rest;
Wracked with Despair each one complains,
Unmov’d, untouch’t She all disdains.

This small aria was performed sweetly by Celine Ricci--all with the wonderful Purcellian expressive ornamentation.

The second half of the program was devoted to the most perfect piece of music ever composed, the small opera Dido and Aeneas.

As is the case with all music from the Baroque, these modern performers ornamented beyond the written score, especially in the repeats. My old-fashioned ears enjoyed it very much.

There is simply too much to write. The excellent chorus transformed into a group of hags for the witches choruses. Cynthia Sieden transformed magically from Belinda to first witch and back again. Celine Ricci sang both the second woman with her amazing aria “Oft she visits this lone mountain,” taken at a very fast clip, and the second witch. “She” in this aria refers to the goddess Diana. Jill Grove was an excellent, evil sorceress. William Berger was the most intense Aeneas I’ve ever heard.

This performance was semi-staged. A throne was provided for Dido, and people moved about, good guys stage right, bad guys stage left.

Susan Graham brought us Dido. I found her voice to be just right for the role, enough weight for the deep sadness of the character, enough lightness for the ornaments. The entire performance was a joy--lively, dramatic and fun.

[My protestations that I did not wish to be famous may be in vain. McGegan kept looking at me and smiling. He does seem to smile all the time, so maybe I imagined this. Or maybe he was just happy we stopped coughing.]
Posted by Dr.B at 11:58 AM

No. I absolutely adore Biber.