Staging opera in the 21st century.

Once upon a time a stage set consisted of painted flat surfaces which could be raised and lowered easily for set changes.  I know at Santa Fe they don't have a space above the stage where the set pieces would usually go, so they slide them on and off at the sides like a deck of cards.  This is smooth and easy, and does not require an army of stage hands.  Who wouldn't fit on the stage at Santa Fe anyway.  There's also a big elevator at the back.

Larger companies like the Met, the ROH and the Bayerische Staatsoper look down their noses at painted flats.  They will occasionally use sets where the objects stay the same but are made to seem varied and interesting through the use of projections.  Lately the projections have started to become movies.

The current rage throughout the opera world is for a whole opera to be presented in a single set.

A set made up of two rows of boxes where the various scenes move from box to box was seen in Peter Grimes from the Met in 2008.  Another similar production was seen in Don Giovanni also from the Met.  This achieves the goal of a single set but makes each scene small and unimpressive.  It looks great in the movie theater but cramped in the house.

Cav/Pag from the Salzburg Easter Festival both was and wasn't done as two rows of boxes.  The bits of stage were framed into boxes, but on the stage things seemed to change and often extend across two or more boxes.  It was both confusing and interesting.  The way this was done seemed legitimately creative, and not just a cop out. 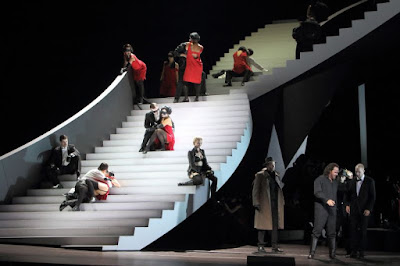 The single set as a giant staircase is another common theme.  We saw this in Arabella from the Bayerische Staatsoper and again in Un Ballo in Maschera from the same company.  Ballo was far more confusing than Arabella.  The visual unity did not match the story of the masked ball.  The libretto says we are in a palace, a cave, a deserted field, and finally back to a palace again.  A giant staircase doesn't communicate this at all.  It communicated that perhaps the prince was hallucinating.

My favorite of all the single set productions has been Don Giovanni in a hotel lobby from Salzburg, seen at top.  Usually the sets for this opera are difficult to follow because each small scene is supposed to represent a different location.  The hotel lobby staging was genius.  All these things might well happen in a hotel, where weddings are celebrated, meetings are held, tourists arrive and leave, bedrooms for dalliance are easily found, strangers encounter one another, etc.

We want more than just money saving single set productions.  We still want the production to explain the action, to intensify the emotions through thoughtful design.  And yes, I know this is a difficult task. I'm starting to feel that all too often the production designer simply doesn't want to spend time discovering the opera and skips to a simple solution.