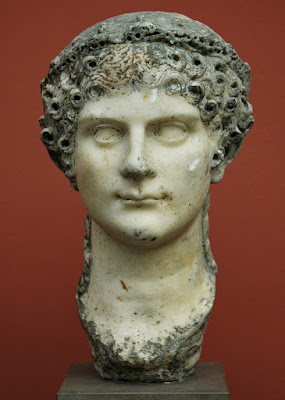 Agrippina is an opera by Handel that was composed in 1709 for Venice.  Why have I never seen or heard of this opera before?  I imagine it is very important to know that it was composed for Venice because the commercial theater there was fond of sexual plots.  Poppea, La Calisto, that kind of thing.  Proper handling of the sexual plot by West Edge Opera has made this an amusing Baroque opera without any distortion of the story.  Structurally it is a Neapolitan opera with an endless series of da capo arias. In Venice both women and castrati sang.  Shortly after this Handel moved to London.  It is important to know that in Venice Agrippina was a hit.

Poppea is the sexual center of attention here as she was in Monteverdi's opera.  She tells us how to draw men's attention and lists for us three men who are interested in her:  Nero, Ottone and the Emperor Claudio.   She is most attracted to Ottone and does not like Claudio at all.

Agrippina has but one objective--she wants her son to become emperor of Rome.  She has no interest in her husband's interest in Poppea and instead uses it to manipulate Claudio for her own ends.  This is a surprisingly good plot.  The opera ends when she wins.  Here I want to complain.  They flashed words on the surtitles screen explaining what happened to the characters after the opera had ended, but they went by so fast I had no idea what they actually said.  A bit slower might be better.  Slower or not at all.

One feature of this opera was brief full-on male nudity.  Agrippina is singing, finishes her aria and says to an unseen man that he needs to get lost.  Nude man jumps out of the bed and runs off stage.  Full male nudity is much rarer in the theater than female and is therefore still entertaining.  People entered down the center aisle of the theater, including Claudio who spoke political phrases in English like an American politician.  I shook his hand as he passed.

The hit tune from this opera is "Come nembo," or at least that's what it's called in Il Trionfo del Tempo e del Disinganno which was composed for Rome.  In Agrippina it has a different text.  It is known because Cecilia Bartoli has recorded it.  Here it is sung by Celine Ricci.

The quality of the singing was excellent throughout, the make or break feature of any Baroque opera performance, with the peak experience coming from Celine Ricci.  Here is Celine in her incredible costume and makeup as Nero. 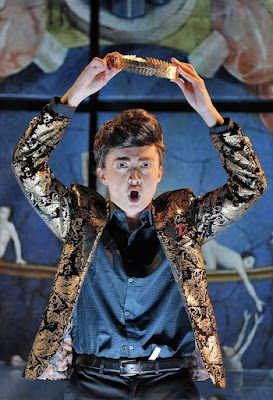 Neapolitan opera, the kind Handel wrote, is probably the most difficult genre to stage successfully.  It works to do silly, mostly irrelevant things as was done in Partenope recently at the San Francisco Opera, and in Agrippina it works just to stage the opera as it is revealed in the libretto.

I won't again try to watch 2 operas in a day, but nevertheless I was very pleased with this. 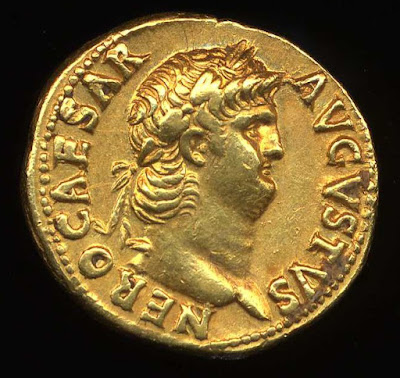 I so enjoyed writing about and listening to Agrippina from West Edge that I immediately bought the All About History magazine with the featured article about Nero.  So what is current thinking about Emperor Nero who apparently killed off all possible successors?

I was especially interested in the current thinking on who burned Rome.  The argument goes from one side that Nero burned Rome to kill Christians.  The other side say the Christians burned Rome so Nero would take the blame.  Crucial factoid in this argument is that the rumor that Nero burned Rome is in fact contemporary with the actual burning.  It is possibly tacked on later that it had anything to do with Christians.  The article seems to conclude that it was not arson.  Just a fire.  A really huge fire.  The argument against Nero setting it is that his own houses burnt down.  This point of view is completely new to me.

I knew the story that Nero fiddled while Rome burned.  The curious story is that Nero considered himself an artist and gave performances at an array of venues.  His citizens who had formerly loved him came to find him disgusting, a lower class artist type engaged in an activity not suitable for the heir of Julius Caesar.

This last may be relevant, at least a little.