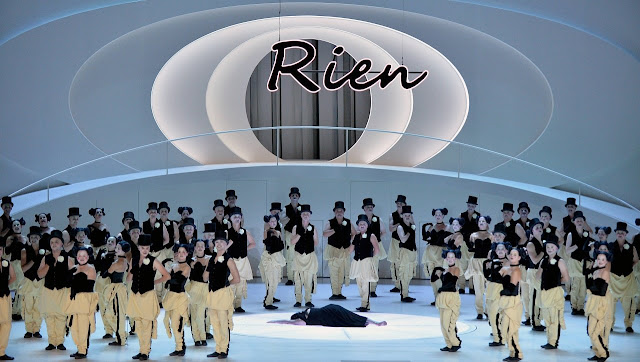 Gounod's Faust from the Salzburg Festival streamed today on medicitv.  It came in a regie production, as you can see in the picture above.  There were many images to choose from, but I have chosen the Rien neon which began and ended the opera.  One puzzles briefly at the start, and then Faust opens his mouth and sings "Rien,"  French for nothing.  Of course.  I have reached Faust's age and listen to his complaining with now more sympathetic ears.  He effectively transforms from a bald old man to a young man with hair.

The white daisies Siebel gives as a bouquet in act III are called Marguerites.

Everything is symbolic.  I have no idea of what.  Abstract shapes that look like nothing at all seem preferable to people in a laboratory for no apparent reason.  Half of the tunes are hit tunes.  I can listen to Pique Dame and recognize very little of the music, while Faust is ever familiar.  The music is intensely nostalgic, a style that grows old for us.  Perhaps a meaningless modernist staging takes away from the nostalgia and makes the music tolerable again.  I actually enjoyed this, an excellent concert with pictures.  The pictures were sometimes odd, but the story line stayed in tact.  Except maybe the baby as a box wrapped as a present.

Maria Agresta gave us a strong Marguerite capable of soaring over the orchestra and chorus.  Ildar was perfection as Méphistophélès, growly and nasty.  Piotr was pleasing.  They could only have cast Tara because they wanted her soft sweetness to contrast with the angry brother and the evil Méphistophélès.

It is a Faust for today.

___________
P.S.  I was reading a review of this production today which covered each of the usual subjects one by one--conducting, orchestra playing, each singer's performance and the production.  Then it suddenly turned into a religious commentary.  Faust is a Christian morality tale.  The lesson is that the devil can do nothing to prevent your salvation.  From a Christian perspective Faust is the essential opera.  We were scolded for our lack of interest in it.

Beginning in 1862 it became the most frequently performed opera in the repertoire for a long period.  Since its premier at the Met in 1883, it has played hundreds of performances, but recently has declined in popularity.  My sense of this is that while people seem never to grow tired of Puccini, Gounod is another matter entirely.  The music begins to sound corny to us.

It is my understanding that this opera didn't sell well in Salzburg.  I don't think lecturing us about Christian themes will save it.