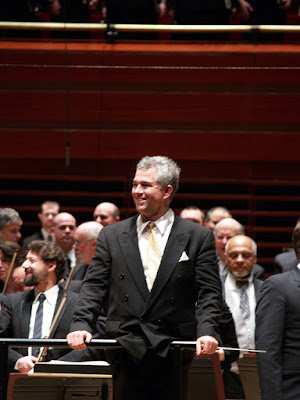 The Sacramento Philharmonic and Opera presented a concert consisting entirely of music composed by Italians, specifically Verdi, Mascagni, Puccini, Rossini and Respighi.  This was conducted by a man with a misleadingly Italian name.  I say misleading because he is actually Austrian.  Or wasn't I supposed to say that?  I read in the fine print that in his spare time he composes Lieder cycles.  I am finding this fine print on my own since there was a mix up with the programs.

There was some singing this time.  Leslie Ann Bradley sang the arias from the last act of Otello by Verdi.  Her voice is very well suited to this music.  I see in other fine print that she has performed the role of Desdemona from which these arias come.  I declare her to be a gifted almost spinto.

Then our tenor, Adam Luther, sang "Ma se m'e forza perderti" from Verdi's Un Ballo in Maschera.  My first thought on seeing him was "oh, a tall tenor."  He is lovely with tons of squillo.

They then performed the love duet music from Act I of La Boheme by Puccini.  This music seemed to be the hardest to conduct.  We don't usually get to see the conductor while this is going on and had no idea.  They can't see him, as they are looking at either the audience or each other, and he can see them only by leaning back and turning, which happened fairly often.  I apologize for finding this sort of thing fascinating.  It was nevertheless pleasing.

All the rest of the music was for orchestra alone.  They began with the Overture from Verdi's La Forza del Destino, a piece that I love.  The opera may be nuts, but the music is some of Verdi's best.  Their rendition of Mascagni's Intermezzo from Cavalleria rusticana was absolutely gorgeous.  This was my favorite thing on the concert.

After intermission we were treated to the Overture from Semiramide by Rossini and The Pines of Rome by Respighi.  The last was excellent, complete with trumpets in the upper balcony.  It was a rousing finish for the concert.

I'm going to make a small post script.  I get the impression that the musicians are suffering from the limited rehearsal and constantly rotating conductors.  The overall sound of the ensemble is fragmented.
Posted by Dr.B at 11:40 AM