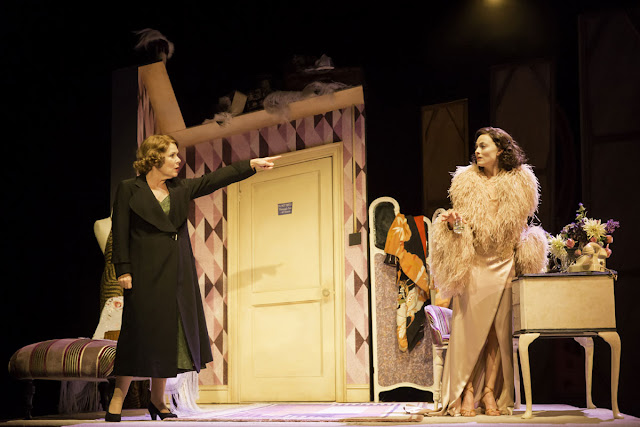 This of course refers to Jonathan Kent’s production of Gypsy, music by Jule Styne, lyrics by Stephen Sondheim, filmed from the West End in London and shown recently on  Great Performances on PBS.

Above are Imelda Staunton as Rose and Lara Pulver as Louise, or Gypsy Rose Lee.  The show brings a lot of memories for me.  I vividly recall fantasizing myself in the role of Mama Rose, the star of the show in spite of the title.  She waited until it was too late to have a career herself.  As of course did I.  I also remember Gypsy Rose Lee on her television talk show. She would flirt with the camera.  I have also read Gypsy's murder mystery called The G-String Murders.

A number of famous women have done Mama Rose:  Ethyl Merman, who is very easy to imagine in the role, Angela Lansbury, and Tyne Daly to name 3.  Imelda Staunton is intensely bitchy in the part, intensely angry and completely believable.  It is a far different experience from the "nice" movie.  The show has only a few hit tunes which are repeated.  If you missed it on TV, watch it on the PBS website.
Posted by Dr.B at 3:07 PM