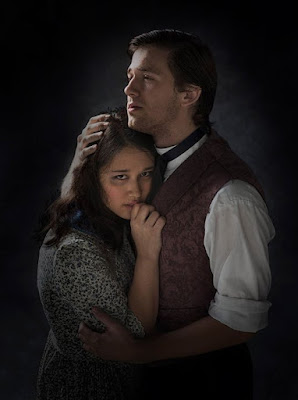 A one act opera called Darling Corie by Elie Siegmeister played at Sacramento State last night.  In the middle of the twentieth century there were several American composers who affected an "American" musical style, and this one is definitely in that camp.  There's also a traditional song called "Darling Cory." The arias sound like folk songs.

We are in small town America where darling Corie has come of age.  One of the young men has chosen her, but she doesn't return his interest.  Her father recommends being tough with her.  A stranger arrives who immediately attracts her attention.  He has nice clothes and money and is sweet to her.  One thing leads to another.

There is quite a bit of chorus.  No supertitles.  They made the most that could be made of this opera.
Posted by Dr.B at 1:15 PM