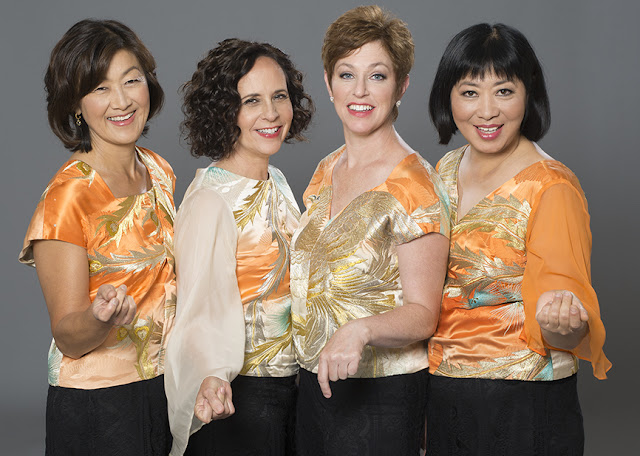 Wednesday at California State University Sacramento I attended a concert by the Cassatt String Quartet.  They are an all female group named after the most famous of female artists Mary Cassatt.  The concert was part of the current Festival of New American Music.  Their members are Muneko Otani, violin, Elizabeth Anderson, cello, Jennifer Leshnower, violin, and Ah Ling Neu, viola (left to right in the picture above).

The program consisted entirely of pieces which premiered since 2000. * indicated west coast premiere.

String Quartet #2 (2013) * by Chris Rogerson
This work in 3 movements began with a reading of the poem Sweetness by Stephen Dunn.  This was a first for me.

"Pulse Space" (2014)*  by Hannah Last
This piece sounded just as you might imagine:  homophonic, pulsing chords which became a bit tiresome after a while..

"Voyage" for string quartet (2013)  by Ellen Zwilich
This is an homage to the Galimir String Quartet, all members of a jewish family of players who escaped the holocaust.  The piece signifies their journey to the United States.

After the intermission were:

"Rising Tide" (2012) by Laura Kaminsky
This quartet is about global warming.

"Black Bend" (2003) * by Dan Visconti
This piece was a fascinating mixture of rock, jazz and what sounded to me like hoedown.  It was fun and made an excellent concert closer.  Elizabeth Anderson, whose cello playing mother was in the audience, commented that she got to do things her mother wouldn't allow.

My only problem with this concert was the overall similarity in the sound of the repertoire selections.  Maybe this is a restriction of the definition of the concert series.