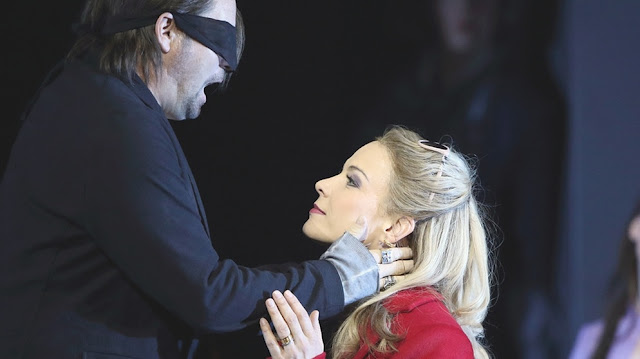 We are experiencing a live stream of Donizetti's La Favorite, in French, from the Bayerische Staatsoper.

If you have Elīna Garanča, Matthew Polenzani and Mariusz Kwiecień, you do La Favorite.  These three are a marvelous trio of singing actors.  We get the full on masculine pig behavior from Mariusz, perhaps in honor of our American pig candidate.  This is, of course, Regietheater.  You know, mostly black modern clothing, no particular set.  There is a section in Act II where Léonor and Alphonse are alone and seem to be watching television together.  This can only have been a ballet.  So he responds in a very manic way to what he's seeing alternating with pawing her.  She finds the whole thing boring.  At one point they laugh.  She tells him that she came to him from her home expecting to be married.

This story conflicts with its presentation in this production.  Alphonse is constantly molesting Léonor in every possible context.  It is simply unbelievable that Fernand does not understand what this means.  She marries in black.  Too many clues, Fernand.  We're not buying it when you "suddenly" understand.  He's claiming his honor is lost.  She's saying his soul knows the truth, so why is his pride so inflamed?  Now she's slinking off in her slip.  The chorus is pommeling her with flowers.

Fernand returns to the monastery and Léonor prays.  All three of our singers are wonderful.  She's back, but this time she has on a black watch cap and another black men's suit.  I am seriously loving the singing here.  The ending is marvelous.  One loves most of all the sounds of their voices, which were beautiful together.

Ten years ago I said about this opera:

"It is only recently that women have broken out of their categories. Before that there were good girls and bad girls, angels and whores. It makes a whole opera plot that a whore is mistaken for an angel. You can't always tell, you know.

"In opera angels are sopranos and whores are mezzos. We realize there are exceptions, such as Manon, but generally whores are mezzos. Carmen, Dalila, Maddalena, and Leonor in Donizetti´s La Favorite. She is the king's mistress, and when Fernand falls for her, she refuses to tell who she is. She deliberately lets him think his whore is an angel.

"The opera has a simple beginning--a priest who has not taken his final vows falls for one of his parishioners--and a simple ending--she saves him from hell by dying. In the middle it gets pretty complicated. The king wants to divorce his wife to marry his mistress in spite of the pope's opposition. Fernand also wants her, and when the king promises to grant him any wish, Fernand wishes for Leonor. The courtiers still consider her a whore and tell Fernand now that it is too late and he has married her that he has lost his honor. From there everything just goes to hell. "

...not to mention one of the best mezzo arias in the repertoire, "O mio Fernando."

Yes. I used to sing it. In Italian.