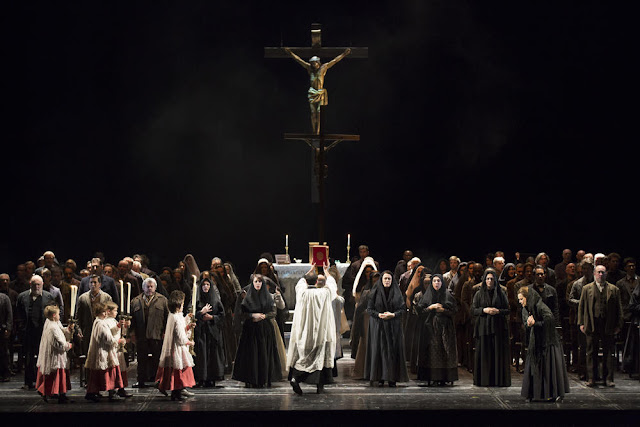 On November 28 we attended Mascagni's Cavalleria Rusticana paired with Sancta Susanna by Paul Hindemith at the Paris Opera.  This double bill was performed without intermission.  Curious, we said to ourselves.  Why would they do that?  And who ever heard of Sancta Susanna?  Well, it turns out that this opera premiered in 1922 in Frankfurt and was a terrific scandal.  I think the modern day European is much harder to scandalize.

The production for Cavalleria Rusticana reminded me of the Cavalleria Rusticana production at the Met. Just furniture and no set.  Normally the Easter mass is celebrated inside a church which appears in the set and Santuzza stands outside.  Here there is no set, so the mass is celebrated on the stage in our view.  My experience of the mass shows the crowd much more active than here.  People stand and sit, occasionally speak, and move to the front to receive the wafer, but here they only mime, of course.  The characters are in front.  I think it was staged this way to emphasize the importance of religious imagery in the story.  The large crucifix becomes a character.

Though I have written extensively about Elīna Garanča, this is my first live experience of her.  In this house her voice was large, full and very suitable for a wonderful Santuzza.  I withdraw all previous reservations about her transition to spinto mezzo.  The singing was spectacular, but the production very much muted the physical parts of her characterization.  Yonghoon Lee is improving.  He looks good and sounds dramatic. 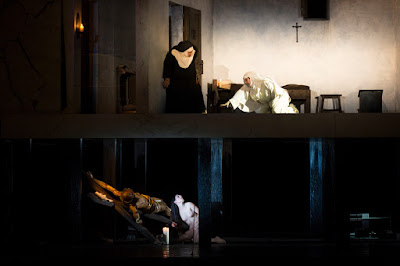 After a brief pause, the curtain rose on the physical parts of the set.  Sancta Susanna was presented as a small chamber surrounded by a giant blank wall.  We had visited the death chamber of Vincent van Gogh in Auvers-sur-Oise the day before and thought Susanna's chamber very much resembled it.  Susanna is a nun dressed in white.  Other nuns appear dressed in black and white.

I was explaining to my son that this is expressionism, an art style that consists of realistic details without context.  Then I thought, "oh."  Thus the giant blank wall.

We are told that Susanna is dying.  The window in her chamber is open, and she intensely enjoys the scents.  Sister Klementia begins a cautionary tale about a woman seen naked in the woods some 30 or 40 years ago.  A space below the chamber opens up, and we see a nude woman and a crucifix much like the one in the previous opera.  Susanna suddenly rips off her habit, revealing her I must say rather gorgeous breasts and declares herself to still be beautiful.  She runs out and throws herself onto the reclining crucifix.  There is much lamenting and confusion.  This is sort of a wtf opera.

Clearly only the beautiful Anna Caterina Antonacci could be expected to pull this off.  Her acting is superb here but the role is a bit contralto for her voice.  As you know, I do not read explanations of what this is supposed to mean before going, but it does seem to me the pairing of these two operas is intended as a religious commentary.  Santuzza tells us that she has been excommunicated but without explanation.

Symbols can be more powerful than reality, and clearly that is the intention here.  It was only partially successful.  It was oddly pleasing to hear Hindemith who is of course nothing like Mascagni but not in any way shocking to modern ears.