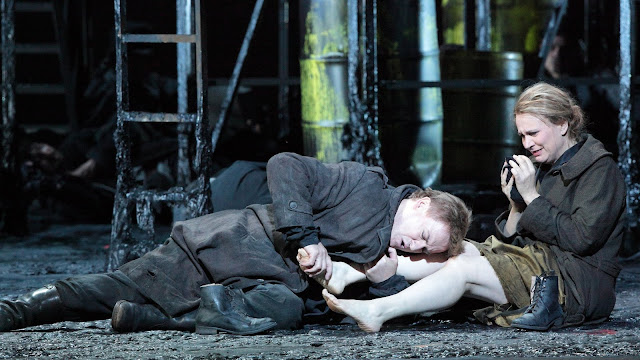 Lady Macbeth of Mtsensk by Dmitri Shostakovich streamed today from the Bayerische Staatsoper.  I have seen this opera twice before, both times at the San Francisco Opera.  This is different somehow.  Kampe is marvelous, but the most applause goes to Petrenko.

This is an opera about a bored housewife.  It begins with her complaining that everyone else has something to do while she just sits around.  The sets are all dark and metallic.  Her room is in the middle of the factory, an incongruity that nevertheless clarifies the action in the first two acts.  She acquires a lover in the person of Sergei, a ladies man.  Their relationship is discovered first by Boris whom Katerina poisons.  Then Zinoviy returns early from his trip and finds Sergei's pants.  He whips Katerina with Sergei's belt and is in turn strangled with this same belt.  There was sex which could have been sexier.

In Act III Katerina and Sergei marry, but soon the body of Zinoviy is discovered and they are sent off to Siberia.  The clothing looks authentically twentieth century Russian without being either colorful or interesting.

The final set looks like a ship with an unnecessary gang plank at the rear.  Sergei has a new lover, Sonyetka, and is trying to get rid of Katerina.  Instead Katerina shoves her off the gang plank, slips and falls in after her.  This was portrayed with great clarity, something I'm always looking for.

The singing was spectacular.  The ensemble of the Bayerische Staatsoper is very impressive.  One should not expect to see a better version.  Our announcer, who I believe is Intendant Nikolaus Bachler, lumped this opera together with Wozzeck and Peter Grimes as the three great tragedies of twentieth century opera.
Posted by Dr.B at 6:06 PM