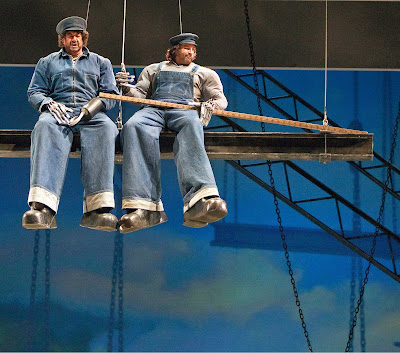 One wishes for Richard Wagner's Der Ring des Nibelungen to be significant.  The teeming Rhine surging in the orchestra in the orchestral intro to Das Rheingold signals something deep.

So tourists on a cruise ship was a bit disconcerting the last time I saw this.  But the lighting is transformed, the pastels are gone and every orchestral transition includes projections of water and landscapes.

As always, Donald Runnicles is the man you want for Wagner.  For the epic poem he is the one.  Remember he was great in Les Troyens as well.

And what an incredible cast.  Big Wagnerian voices are everywhere.  Falk Struckman, our Alberich, was the only SFO debut.  The force of his portrayal makes Alberich the main character here.  He convinced in his transition from lover to tycoon to reprobate.  We realize what he does not--his loss of the Ring only affects his self confidence, not his authority.

Štefan Margita's Loge was also outstanding.  He lords it over Wotan at every turn.  Only Wotan seems not to notice.

My reaction to this whole opera is that when a voice dominates the ensemble, that character dominates the narrative.  That's why it comes out different each time.

Das Rheingold exists only to set the stage for the next three operas.  The Rhinemaidens have lost their gold and their charm; Alberich has lost his authority and love; Fafner has killed his brother but gained the ring, a trinket he has no idea how to use; and Wotan has his Walhalla and his Fricka.  Only Erda sees tragedy coming.

The changes to the production promise significant events to follow, not just fun on a cruise ship.