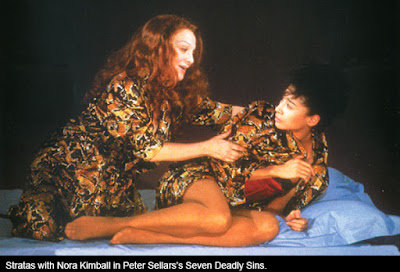 Die sieben Todsünden [Seven Deadly Sins], 1993, by Kurt Weill with text by Bertolt Brecht, directed by Peter Sellars, represents the intersection of two of my obsessions:  Weill and Sellars.  One will probably run out soon, but the other is forever.  This work is called a ballet with song.

A:  Prolog  Anna I sings, she is from Louisiana.
1:  Sloth    Family sing.
2:  Pride (Memphis)   Anna I sings, Anna II dances.
3:  Anger (Los Angeles) Family sings, Anna I and II are arrested.
4:  Gluttony  (Philadelphia)  She writes her family.  One of the guys is wearing an As jacket.
5:  Lust  (Boston) They are hooking, Anna II has a pimp and gives him her money.  Strife.
6:  Avarice  (Baltimore) She's a celebrity?  Golf.  Family sing.
7:  Envy  (San Francisco)  Anna sings.  Wrath is kindled by injustice.  Definitely San Francisco.
Z:  Epilog  They're home, but they don't look happy.

This is fun, the music is nicely played and sung but one grows tired of the endless closeups which seem always too close.  One might wish to see it in a theater.  I get the impression this was originally performed as a ballet in Lyon 6 years earlier.  I might have preferred that.  Faces without context don't make a story.  I will need to see other versions.