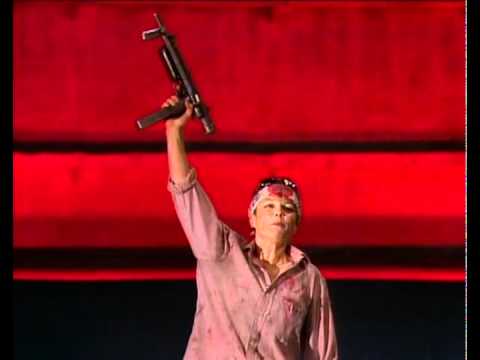 Forgive me.  I approach everything from the perspective of obsession and am watching Peter Sellars' take on Handel's Giulio Cesare from 1993.  There is no indication of a live audience.  Jeffrey Gall is Caesar, my fourth countertenor experience in this role.  He has a brighter sound than Scholl, Daniels or Fagioli.  His coloratura is impressive.  One of the firsts for me here is Lorraine Hunt en travisti as Sesto.  I would not have gone in quest of Peter Sellars if it weren't for the hidden treasures of Lorraine.  This is filmed somewhere in Europe.


Tolomeo, Cleopatra's brother, is sung by Drew Minter, Cleopatra is Susan Larson and Cornelia is Mary Westbrook-Geha.  My point of departure for the role of Cleopatra is Cecilia Bartoli, and Susan Larson sounds nothing like her.  I don't know how much of this I can watch.

I am mentally reviewing the versions of this opera that I have seen and can only conclude that it is regarded as a comedy.  In Zurich the Egyptians wear striped boxers.  In Salzburg Cleopatra rides a rocket.  At the Met we have wandered into a Bollywood movie.  It's hard to take any of these seriously.

This one is also not serious.  Caesar is president of the United States, apparently, due to seal of the President on the podium.  Tolomeo most resembles a punk teenager.  We have begun to notice that Peter Sellars' version of Regietheater moves every opera to somewhere American.  This is what he knows, so this is what he does.  The first person who appears representing Tolomeo and delivering Pompey's head is dressed a bit like Fidel Castro.  This at least is serious.

Caesar and Ptolemy are negotiating, and after a while Caesar starts throwing cups and felt tipped markers at Ptolemy.  Caesar has a lot more pens in his pockets and he throws them.  Then he opens the water bottles, spills water all around, and exits smiling.  He's always smiling.  Sellars seems to have anticipated our current administration.

By now I am used to the musical quality of the Bartoli GC.  Perhaps I am spoiled forever.

In Act II both Ptolemy and Achilla are harassing Cornelia.  They are laying it on pretty heavy.  So far she just frowns.  Ptolemy wraps her in a garden hose.  Sesto plans to accompany his mother into Ptolemy's harem where he can exact his revenge.  I am watching this for curiosity.  It isn't redeeming itself.  Only Lorraine is outstanding.  She waves her machine gun around menacingly.

They go with comedy all the way to the end.
#ad