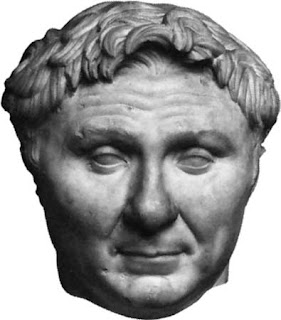 There is so much to write about Handel's Giulio Cesare simulcast from the Metropolitan Opera.  Let's start with this head which appears broken in the production.  We're clear that this is Pompey the Great, right?  Not Julius Caesar who looked more like this. 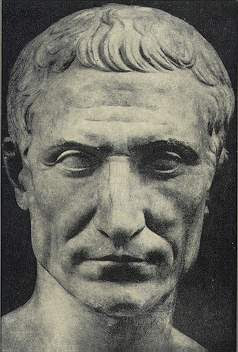 Everyone calls the production Bollywood, a genre I'm not particularly familiar with.
This opera staging has nothing to do with Rome and everything to do with the British Empire in Egypt.  It is much easier to distinguish the two ethnic groups, Europeans and Egyptians, than other productions of the opera I've seen.  When the Egyptians woo Cornelia (Patricia Barton), she is convincingly repulsed by them.  The British appear often in their red and khaki uniforms.  Julius Caesar wears a long, calf length coat.  The Egyptian serving men wear the fez, a red cap that does not fall off when they bow.  Ptolemy and Cleopatra are constantly changing their clothing throughout the opera.  Renée Fleming even interviewed the dressers.

Natalie Dessay is a fine dancer as well as a wonderful singing actress.  I may have imagined it, but didn't she leave out "Tutto puo donna vezzosa?"  If you search carefully, you can find a film of Natalie singing it with one bare breast.  My mind may have wandered, but I was specifically looking for it.  I went out in the first act, so perhaps it came then.  My favorite staging in this style was definitely "Da tempeste."  Enormous fun.  This production is very entertaining, but the emphasis on dancing may limit the enjoyment of the singing.

I'm going to have to get a score of this.  There was a lot more recitative in this one than in Cecilia's version.

Now I must discuss David Daniels.  He has such a reputation that it has simply made me curious.   Now I know why.  I have never heard a countertenor with so much emotional range.  He dominates the role of Julius Caesar in a way that the others I have heard do not even approach.  It is extremely exciting and definitely moves the opera to center on the title character.  Bravo.

Harry Bicket conducted and played the recitatives.  He praised the Met orchestra for their growth in the performance of Baroque repertoire.

Giulio Cesare is unquestionably the greatest of all the Baroque operas, for the marvelous and varied character of the Queen of Egypt, for the rapid movement from serious to comedy and back again, for the gorgeous arias, for the opportunities it gives to great singers of each passing generation.