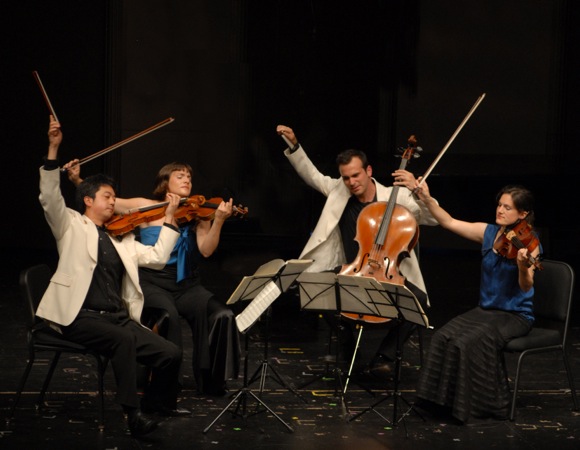 Baritone Thomas Hampson appeared as vocal soloist with the Jupiter String Quartet at Mondavi Center in Davis Wednesday evening in a pleasing combination of familiar and unfamiliar music.

I have chosen to show this picture of the quartet with their bows raised because this was a feature of the performance.  They began the concert with an early quartet by Schubert, String Quartet in Eb, D. 87.  The four movements--sonata allegro, scherzo, slow movement, another sonata allegro--were not listed in the program.  This and the elaborate gestures shown above led to a lot of clapping between the movements.  Or perhaps the tradition of waiting quietly for the piece to finish is disappearing.  I remember in Paris Simon Keenlyside had to ask the audience to please not clap between the songs in Dichterliebe.  If they don't remember in Paris, why should they in Davis?

There was a kind of late Romantic quality to the remainder of the program.  There was a very early and therefore late Romantic piece by Anton Webern called Langsamer Satz, which just means slow movement.  I enjoyed this music quite a lot.  The Jupiter String Quartet is a somewhat sedate ensemble who may try to compensate with big gestures. 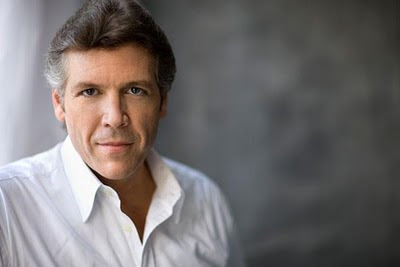 Hampson's presence on the program brought us Aristotle, a new piece by Mark Adamo.  I find it impossible to describe this poem, but you can read it here.  My favorite part was "piles of ripe avocados" which came in the middle.  The poem has three sections:  Beginning, Middle, End.  So the avocados come in the middle of the poem in the section called Middle for no discernible reason.  Perhaps it's a literary reference.  (I see there is a blog named Piles of Ripe Avocados.)  We may deduce what is meant by "It is Sylvia Plath in the kitchen" in the End section.  She must have committed suicide in the kitchen.  Adamo is suitably post romantic for this very post romantic concert.  He was there to receive applause.

The program ended with the for me familiar parts:  a group of songs by Hugo Wolf accompanied by the string quartet.  The program does not say who arranged them for string quartet, but the arrangements are very pleasing.  I have heard Schubert Lieder arranged for instrumental ensemble and not liked them.  Schubert's piano is very percussive and idiomatic, and for my ears the songs were destroyed by these arrangements.  Wolf survived the transformation quite nicely.   For Wolf it's all harmony and phrase rather than text painting.

And for an encore...
Der Rattenfänger