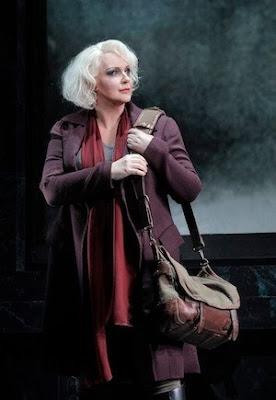 I have always considered Die Walküre my favorite part of the Ring.  Some scenes are the best part of the Ring while others are just endless talking.  As the years have passed, I increasingly see Wotan's long winded explanation to Brünnhilde as a self serving excuse for his screw ups.

But the opening scene is a joyous occasion.  Karita Mattila and Brandon Jovanovich are marvelous as the twins reuniting after a long separation.  I think modern audiences feel that a woman who never wanted to marry in the first place is fully justified in running off with an attractive almost stranger.  "Du bist der Lenz" is a gorgeous love song well sung here by our Siegmund.  Ok, I'm happy with him as a heldentenor.  They made a great pair.  The staging for this scene is excellent.  Except one minute there's no tree and the next minute there it is. 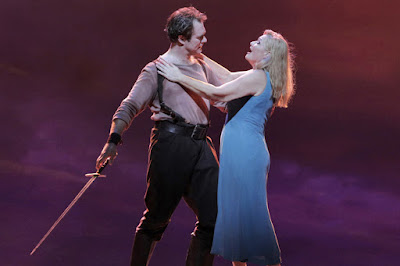 I enjoyed very much Iréne Theorin's entrance in act II.  Her "toi-jo-to-hos" were impressive.  This was followed by the spectacular tantrum of Jamie Barton's Fricka.  She is very put off by the twins thing.  Wotan drones on but completely messes up.  What is his "will" supposed to make of the fact that first he tells her to make Siegmund win the battle, then completely reverses himself to please Fricka.  She knows what his true will is and does that.

Then we have a scene under a freeway like a modern homeless couple.  Or another opera seen recently.  Sieglinde is having difficulties.  Here occurs the scene where Brünnhilde fulfills the Valkyrie's main role--she offers him eternity in Valhalla.  He refuses because Sieglinde will not be there.

The battle between Siegmund and Hunding has Brünnhilde fighting for Siegmund and Wotan against him.  Wotan wins, but Brünnhilde spirits Sieglinde away to save her unborn child.

I thought all these scenes went very well.  The highlight of this production is the Valkyries flying in on a wire with their heroes.  This is a piece of fun.  Brünnhilde walks in like a sensible person but has no hero.  Then follows the greatest scene in all the Ring:  Wotan's farewell.  He makes her into a mere human as punishment.  The music is very beautiful and was well sung by Greer Grimsley.

The quality of the singing is very high.  The staging sometimes works and sometimes doesn't.

A small additional comment:  at every possible opportunity the audience gave the orchestra and maestro Runnicles a huge ovation.  He was very popular here.