Breaking The Waves at West Edge 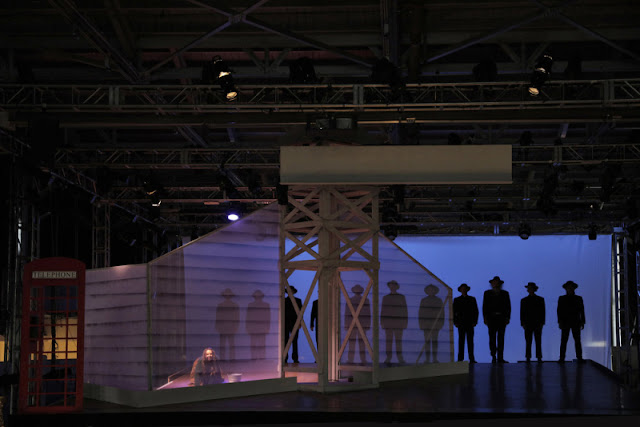 Breaking The Waves (2016), music by Missy Mazzoli, libretto by Royce Vavrek, was presented by West Edge Opera at The Bridge Yard in Oakland on Saturday night.  We are in rural Calvinist Scotland in the 1970s.  I think we may assume this was around the time that oil was discovered in the North Sea.  They keep referring to "the rig" which we may assume is an oil rig off the shore.

The community, or the ones in charge at least, do not like outsiders.  Sara, a child of the community, has fallen in love with Jan, a worker on the rig who is from Norway.  Dodo is another outsider who was married to Sara's brother who died.  Dodo and Sara are close.  Jan and Sara marry and are happy at first.  Soon Jan must return to working on the rig.  People don't think these things through.

The atmosphere was well captured by the production, and atmosphere is almost all there is.  Church fathers hover over everything.  Sara is very religious and prays constantly.  Unexpectedly, God answers through her.  This is a really tough part.  Jan is injured and asks Sara to go out and have sexual experiences and report back to him.  Her personality gradually disintegrates.  This is a true tragedy.  Her casket is sent out to sea, the only reference to waves.

The music is pleasing and was well performed.  The orchestration included a synthesizer and an electric guitar.  My favorite of the singers was Kindra Scharich, but I usually go for the mezzos.

The Bridge Yard is very hard to find and very close to the freeway.  Most of the time the sound from the freeway was not disturbing.  The acoustics were not favorable to light voices.