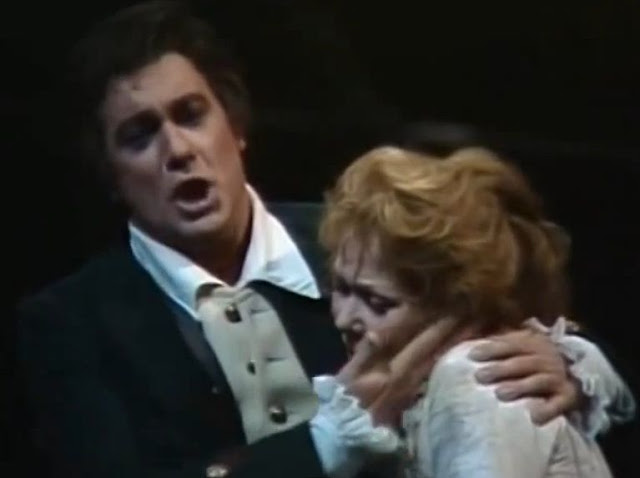 Three days ago the Met brought us Massenet's Manon.  Today the Metropolitan Opera streamed Puccini's Manon Lescaut from March 29, 1980.  In the streaming series we have already seen Scotto in La Bohème, 03/15/1977.  In the three years between these broadcasts, she lost weight and looks like we are used to seeing her.  We believe Domingo when he exclaims about her looks.
One cannot help comparing the two operas.  Massenet messes around for quite a while before the train arrives carrying Manon.  Puccini puts the carriage arrival with Manon and the falling in love right at the beginning.  He follows this with a gorgeous tenor aria.  He is the master.
This opera jumps directly from the escape with Des Grieux to her life in luxury with Geronte.  This Manon is more of a narcissist.  Puccini begins act II with a tremendous aria for the soprano.  This is followed by the madrigal.
When Cecilia Bartoli recorded the Madrigalist for the Decca recording, of course I bought it.  So this opera plays in my head with Mirella Freni and Luciano Pavarotti.  I love the sound of Pavarotti better than Domingo, but Placido is adorable to watch.
The opera takes place before the French revolution.  Gian Carlo del Monaco is the son of Mario del Monaco and received opera from his father's knee.  He tries to evoke the intended setting, and I find this successful.
Manon very much wants to have her cake and eat it too.  I always think this opera is much sleazier than the other one, but maybe that's mostly because I've seen Netrebko with all her joie de vivre  in two different productions of the other one.  The music here is gorgeous, but you can't help feeling she gets what she deserves.   Scotto dies in style.
#ad
Posted by Dr.B at 11:07 PM