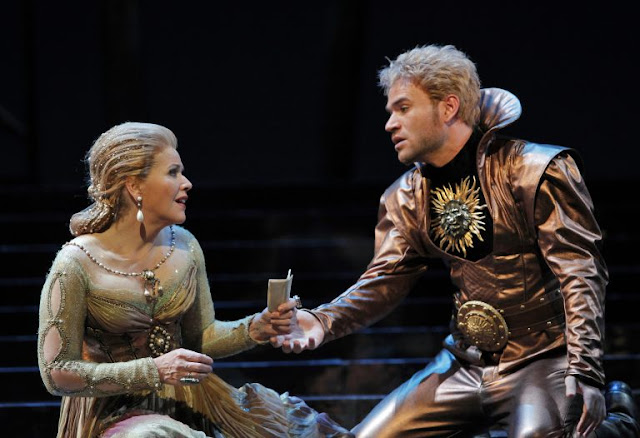 Conductor - Riccardo Frizza
Director and Production Designer - John Pascoe
Michael Fabiano - Gennaro
Renée Fleming - Lucrezia Borgia
Vitalij Kowaljow* - Duke Alfonso
Daniel Montenegro* - Rustighello
Ryan Kuster* - Astolfo
Blanche Hampton* - Princess Negroni
Elizabeth DeShong - Maffio Orsini
The most fun part of Donizetti's Lucrezia Borgia from the San Francisco Opera is Michael Fabiano in a wild blond wig.  We are used to him bald, but with hair he is completely gorgeous.  Sigh.
I was present at the original performance series in 2011.  Hearing it again, I am most impressed with the ensembles.  Musically it is a joy, and with a film acoustic and balance problems are fixed.
The production and singing are enjoyable, but it is clear that Lucrezia creates her own tragedy.  She has searched for Gennaro and has finally found him in Venice.  He shows her a letter from his mother.  No matter how dire the circumstances, she never tells anyone that she is his mother.  Not even him.  She's willing to risk killing him but not this.  She would not risk her own status.  It's ok for men to have illegitimate children, but not women.  So everyone dies.  One does not identify with this story.
#ad
Posted by Dr.B at 5:42 PM

One of Donizetti's best operas; a shame it's not performed more often. Fun fact: The choral tune in the opening scene was originally used in his one-act opera "Francesca di Foix" (1831 for that opera; 1833 for "Borgia").

Hi Paul. This is the only version I've seen of it. It made more sense the second time.