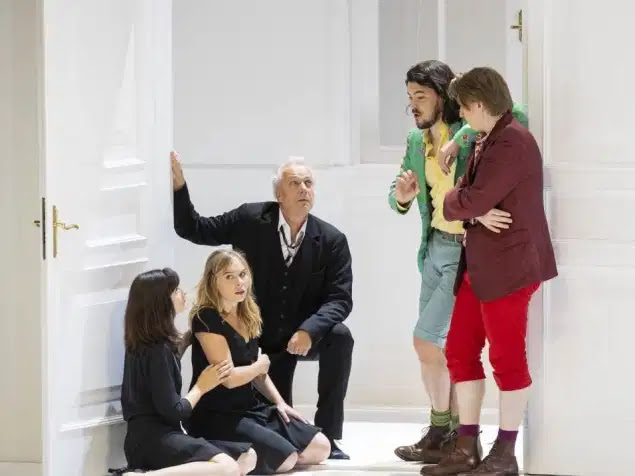 This year isn't just the Beethoven year, it is also 100 years of the Salzburg Festival.  They were determined not to just skip the whole thing like almost all the other festivals, so they reduced it as far as possible.  There are quite a few concerts but only two operas, down from 10.  We are concerning ourselves with Mozart's Cosi fan tutte.

This is a regie production which provides virtually no context.  We are in white rooms with no furniture.  The clothing is the usual modern black outfits, except for the guys.  They start out in the usual black suits, but when it's time for them show up in disguises, they are in the above outfits.  If you have no idea what goes on in this opera, you still won't.  They are supposed to be in disguise, but they would know who they are.  Obviously.  Despina's first act aria is cut.  In fact the whole performance is at least a half hour shorter than usual.  I notice that Dorabella has a tattoo on her ankle.  So these are modern children.

In their funny outfits after the poison gag the guys woo the same girls they did at the beginning.  This is not how it's supposed to work.  They switch back and forth.  Hmmm.  These guys are not in disguise.  They are just messing with them.  The girls get pissed and the boys split.
This production seems to have its own plot.  The guys are back in their dark suits way before they usually are.  I don't think I like any of these people.

But the music is gorgeous.  The soprano ornaments her arias.  Have I ever heard this kind of ornamentation in Mozart before?  I don't think so.  The tenor is also lovely.

No one is fooled at any point.  They end up in the beginning arrangement, but it could have gone either way.  I still want a trick ending.