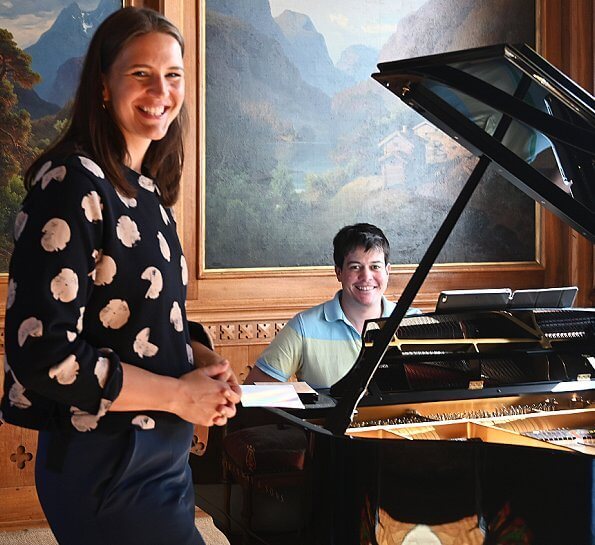 I have changed the picture to this one that shows both of the faces of the performers in Lise Davidsen's Metropolitan Opera sponsored recital on Saturday.  For the performance they were dressed in normal recital clothes.

Lise began with what is already her signature piece:  “Dich, teure Halle” from Wagner’s Tannhäuser and followed it with “Allmächt’ge Jungfrau” from the same opera.  I reviewed her performance of this at Bayreuth in 2019 and said: "Lise Davidsen is utterly magnificent.  I adore her 'Dich teure Halle.'"  It's somewhat less impressive with piano but is still excellent.  I have also seen her in a production of Fidelio from the Royal Opera described here.

In a similar vein she performed “Es gibt ein Reich” from R. Strauss’s Ariadne auf Naxos.  This also displays perfectly her suitability for German repertoire.  I enjoyed this very much.

Operatic pieces included one Verdi,  “Morrò, ma prima in grazia” from Un Ballo in Maschera, and one Puccini, “Sola, perduta, abbandonata” from Manon Lescaut.  All of her operatic selections were easy for her.  She is never pushing or struggling with the notes.  She has been taught an excellent legato as well.  Or perhaps she comes by it naturally.  Operatic works were alternated with song repertoire.
She finished with pieces approaching pop songs, ending with "I could have danced all night" where we were invited to sing along.
That's Norwegian, Finnish, German, Italian, and English.

She grows on me very quickly.  The Queen of Norway loves her.  This is an excellent selection of pieces for her voice.  She sings from a place of joy and peace.  We should await a long career.

She was hosted by Christine Goerke.