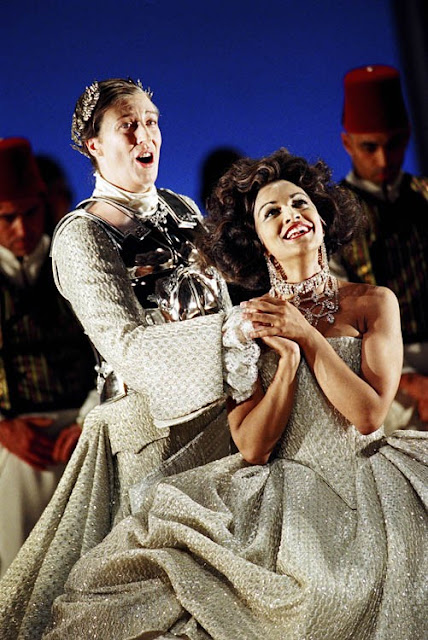 This performance of Handel's Giulio Cesare took place at Glyndebourne in 2005.  This is the David McVicar version that ran at the Met with David Daniels and Natalie Dessay in 2013.  I called it Julius Caesar the Musical.  I enjoy remembering that Natalie was ill for one of the performances, and Danielle de Niese was in town.  Naturally she took advantage of the opportunity and stood in for Natalie.  That would have been fun to see.

We are projected in time into the British Empire.  The Egyptian servants wear the Fez, and the Roman Army are dressed in the red uniforms of the British Army.  There is no evidence of Islam, I guess.  Cleopatra looks like a modern woman.  There are WWII ships and dirigibles.
In the real time of Julius Caesar the rulers of Egypt were descendants of one of the generals of Alexander the Great but still called themselves Pharoahs.  This is the original and in my opinion is better than the Met version.

I think I prefer this cast.  They are sincere in their change from Roman to British empire.  Angelika Kirchschlager is maybe the best trouser singer I have ever experienced.  It's worth it to see her alone.
I'm never really wild about countertenors, so I am happy to see that Giulio Cesare is sung by the great Dame Sarah Connolly.  She even sort of looks like Caesar and carries herself like a great general.  This is Danielle de Niese's first big success, indeed this is her masterpiece.  She sings, she dances, she brings us joy.

I notice that the two dead guys, Tolomeo and Achilla, come back to life.  I also noticed this in Cecilia Bartoli's version.  The characters must have singing in the finale.  Here it is staged, but we're not sure what it should mean.

I loved it.  It runs for a little longer from Glyndebourne, so try to see it.
#ad