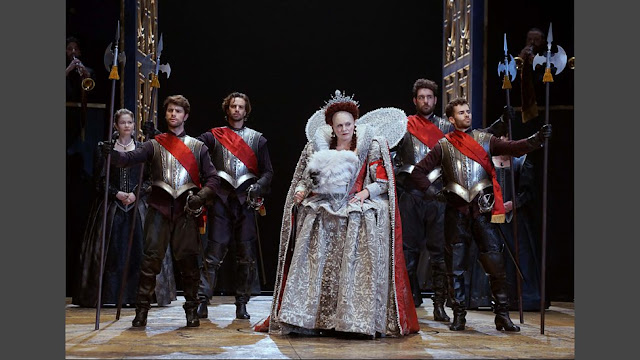 This production on medici.tv of Benjamin Britten's Gloriana comes from Teatro Real de Madrid, 2018.  The opera was composed to honor the coronation of Elizabeth II in 1953.  The queen herself came to the first performance.  It looks as you wish it to.  The costumes are magnificent.

The relationship between Elizabeth I and the Earl of Essex is well known.  Less well known is his rivalry with Lord Mountjoy.

There is a masque portraying Concord dancing.  I am fascinated to see that this female role is played by a man in drag.  Accurately in short.  All the dancers are guys.  It's fun.  All is to glorify the Queen who adores it.

The star of this production is Anna Catarina Antonacci whom I have seen in Carmen with Kaufmann, in La Ciociara by Marco Tutino in San Francisco, in Sancta Susanna by Paul Hindemith at the Paris Opera, and in La Voix humaine by Poulenc in San Francisco.  This is a wonderful variety of roles all performed by a great singing actress.  There is great range in her portrayals, and that certainly is true here as well.  Her Elizabeth is mature.

Here we see Essex and Mountjoy plotting treason against the Queen.  Other versions slant the story more in favor of Essex. I'm fascinated that with the inclusion of period musical forms Britten is trying to bring the past to us.  The music is still Benjamin Britten and not Elizabeth's time.  There is a gathering of the court for entertainment, and Essex has brought his wife dressed more beautifully than the Queen.  Elizabeth orders the women to change their attire and steals Frances's dress.  When everyone reappears, Elizabeth is wearing the beautiful dress which she declares too long.  It is surprising that at this moment she sends Essex off to Ireland.  The scene ends with yet another dance.

In the next scene Essex returns from Ireland offering a truce.  The Queen wanted victory, not a truce.  There is something stunning about this.  The use of musical forms to frame the scenes is very attractive.  Why have I never seen it before?  I feel they are trying to show the truth, very rare in an opera.