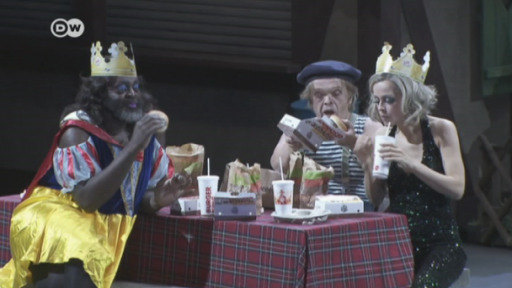 Tannhäuser from Bayreuth from 2019, which can be found in Opera on Video, is a confusing mix of images.  The first scene suggests that we add it to the caravan series, since we see Tannhäuser, Venus and her troop wandering around in an RV in the guise of a carnival.  Venus drives.  They live outside the law.  When the vehicle runs out of gas, they siphon some from a nearby vehicle.  They go through the Burger King drive through and steal their food.  This is not realistic since you always have to pay before they give you anything.  A policeman tries to stop them and Venus runs him down, making Tannhäuser uninterested in going on with her.

In the second scene the curtain opens on an exterior shot of the Bayreuther Festspielhaus.  He is met by a bunch of guys in black outfits drinking beer out of the bottle.  They recognize him in his clown outfit and welcome him back.  At the end of the scene Venus arrives in her RV.

Lise Davidsen is utterly magnificent.  I adore her "Dich teure Halle."  Our boy is back in normal clothes.  Or at least the clothes suitable for the singing contest that is to come.  People begin to enter.  Outside Venus and her gang are trying to get inside.  This must play like a film inside the hall.  Venus steals a suitable outfit from one of the dressing rooms and participates in the ceremony.  This whole thing is like a movie with cameras behind the scenes.  Is that the trend of the future?

The contestants sing about love back and forth until Tannhäuser tells the crowd that he has been in Venusberg.  The women in the crowd all escape except for Elisabeth, Venus removes her disguise, and her group all appear together with Tannhäuser.  Elisabeth prevents the men from killing him, and he thanks her.  The scene is strange.  While Tannhäuser thanks Elisabeth, he is also happy to see Venus.  Someone calls the police.  The Landgraf curses Tannhäuser for admitting he was with Venus.

I am enjoying the idea that the teure Halle is the Festspieshaus itself.  A song contest with pieces that are more like songs would have been nice.  The story is concerned with salvation, and the music is a bit droning.   Tannhäuser chooses to go to Rome with the pilgrims and the giant black man in drag drapes a rainbow flag over the harp that accompanied the singers.

This is almost the Tannhäuser as comedy version. Frei im Wollen! Frei im Thun! Frei im Geniessen!  R.W. [Free in the wanting! Free in the doing! Free to enjoy!]  This seems to be the opposing of two life views that make up the struggle of modern life:  The path of individual freedom represented by Venus and the path of adhering to social norms represented by Elisabeth.  The sign outside the Festspielhaus seems to place Wagner on the side of freedom.  Our hero vacillates back and forth between them.  One gives him a life of earthly pleasure and the other brings salvation to his soul.  He seems to want both.

It ends horribly.  In the libretto first Elisabeth dies, and then he sees her body borne past him, and Tannhäuser dies.  In this version Tannhäuser goes off with Venus, Wolfram sees his opportunity and dresses up in Tannhäuser's clown outfit so Elisabeth will think he is the man she loves.  He seduces her in this disguise, and later we see her covered in blood.  She seems to have killed herself.  This is truly hideous.

I watched the film of Tannhäuser from Bayreuth in 2019 again because it is now playing again in Bayreuth in 2021 and I cannot go. Ekaterina Gubanova is Venus in the current version, and this may be an improvement.  I had already seen all the shocking parts, and was content to watch the whole opera.

I noticed the part where it is indeed Katarina Wagner who calls the cops, as a joke, I assume.  I saw that Wolfram puts on Heinrich's clown outfit, but isn't actually trying to fool Elisabeth.  She laughs and draws him into the van.  That puts a completely different spin on it.  It's too bad she doesn't love Wolfram who is quite charming.

The more I see and hear of Lise Davidsen, the more I admire, enjoy, respect and indeed love her.  She is very well suited to this role.  I am a long distance from having too much of her.  Es lebe die Lise.