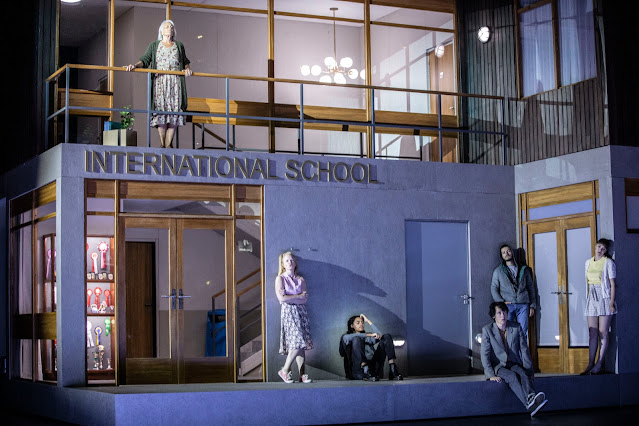 Kaaija Saariaho's new opera in 5 acts without intermission is called Innocence.  There is a film available from Aix en Provence which runs under 2 hours.

Something terrible has happened before the start of the opera.  Research tells me that there are two groups:  The wedding party, and the teacher and her students who were present at a shooting that took place at their school 10 years before.  [It is strange to me that I am watching this on the 10th anniversary of a shooting in Oslo--irrelevant, or perhaps not.]  I found this in a review, and without it I would have had a hard time figuring out what was going on.

The father talks about another son he had and how he taught him how to shoot. This is dense and very complicated.  I think that they are reliving the tragedy.  This would be more possible with English subtitles.

Attempt at a plot summary:  ten years ago at the International School in Helsinki one of the students stole his father's gun and shot a number of his fellow students.  Quite by accident the Waitress is serving a wedding in modern times.  Her daughter was one of the victims, and she recognizes the family.  The Groom is the brother of the boy who killed the others, including her daughter.  We learn that the murderer is out of jail and has been given another identity because he was a child at the time of the incident.  The Groom has not told his bride, whom he met in Bucharest.

The subtitles are in French, but I am hearing English occasionally.  One character speaks German. Some speak French.  Some characters change languages.  I hear other languages which I do not speak.

This is a story of modern times, a story where people think of shooting others around them.  Perhaps it is a suitable subject for an opera.  The thing I have seen recently which most resembles this is the recent production of Die Tote Stadt.  We seem to change from one reality to another with no transitions.  At the end everyone goes off on their own.

It's deeply gripping and very relevant.  I was drawn to it, but I would need more explanation and English subtitles.

It turns out it is more than a coincidence that I was reminded of the recent Korngold Die tote Stadt. The same guy directed both. Since I assign to the director the task of explaining the story, he is not focusing on that.