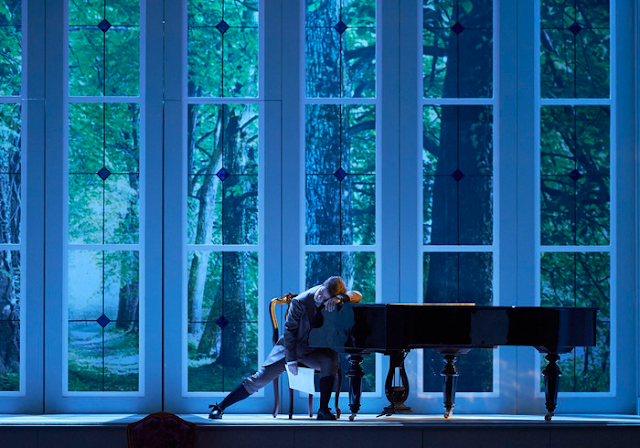 This has popped into my awareness just at the right moment.  It is Richard Strauss' Ariadne auf Naxos from the Wienerstaatsoper, 2017, and can be found on Opera on Video.  My copy has no subtitles.  We begin with this wonderful view of the rich man's garden and progress to the artists' dressing room.  Everyone does their own makeup.

I'm here for Lise Davidsen, of course.  In the opening scene Rachel Frenkel earns a mention.  She is an excellent Komponist, who appears only at the beginning.  Originally this opera consisted of only the second act which appeared after a play by Moliere.  In our production she appears around the set in the second half.  She accompanies Zerbinetta on the piano for her big aria and composes a cadenza for her while she sings.  This is a logical addition to the staging.

Complaining.  The voice/orchestra balance is terrible.  In the second half the purported audience is shown at the rear of the stage.  This would be the rich man and his guests.  The singers all turn towards us, of course, which seems rude.  The set for the second half is grand pianos thrown all around.  One realizes that if everything was changed at the last minute, it would all be exactly as chaotic as this staging.

I have not come in vain.  While Lise sings “Es gibt ein Reich,” Der Komponist walks slowly as though in a trance down from the onstage audience.  He cannot believe what he hears.  Such a glorious legato which moves effortlessly from low to high, from soft to loud we have never heard before. The upper register is gorgeous.  The clowns come out before she finishes, so there is no opportunity to clap.  This is a great lady.  It's always wonderful to have someone new to love.  Lise owns this role.

You might also want Erin Morley for your Zerbinetta.  At the very end the Komponist kisses Zerbinetta.

This is one of Strauss's more significant tenor roles, and it very well suits the Heldentenor we have here.
Posted by Dr.B at 5:04 PM