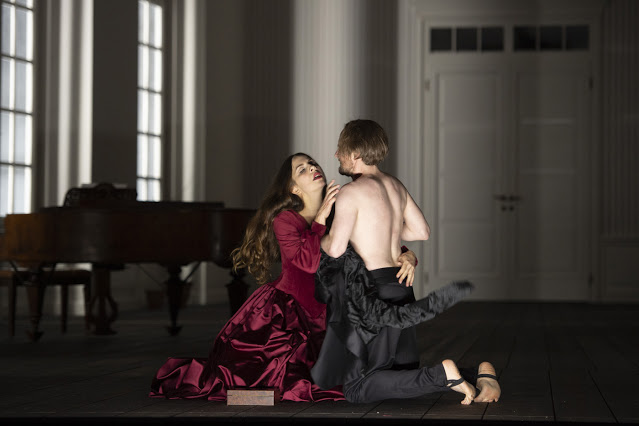 Weber's Euryanthe, 1823, comes to me from Operavision. The performance is Theater an der Wien, Vienna, in 2018.  It's unusual for an early German language opera because there is no spoken dialog.  We seem to be getting orchestral recitative.

Women's costumes are from the 1950s.  We are in a large room with windows on the left and a door at the back, containing only a small hospital bed and a grand piano.Throughout the opera a super plays the queen.

Adolar loves Euryanthe and praises her purity.  Lysiart says purity is not to be found among women.  They argue and make a bet.  The King must hold the proofs of the bet.  They all just look like business men in dark suits.

A blond woman enters and sings about her Adolar.  She must be Euryanthe.  And the dark haired woman must be Eglantine.  Euryanthe has rescued Egalantine, but despite this she still tries to ruin Euryanthe's life by betraying her.  Because she too loves Adolar.  The music is very serene.  If you didn't know what was going on, would you guess it was this?  Egalantine has a nice rage aria to liven things up.

At the beginning of Act II we have an extended male nude scene with Lysiart.  The lighting and camera angles are carefully managed to blunt the effect of this.  Why do it if you can't see it?  This is an opera about violent jealousy.  The two villians, Eglantine and Lysiart sing an extended duet where they swear revenge on Euryanthe.  At the end of Act II Eglantine is seen banging away theatrically on the piano.  I don't really hear a piano.  They blame Euryanthe for revealing a secret she has sworn to keep, and she runs out.  Even Adolar rejects her.  The secret is personal, so I don't see what the fuss is about.  Adolar's sister Emma has killed herself and her ghost still roams.  She needs the tears of an innocent to put her soul to rest.

Act III same room, no furniture.  They're supposed to be outdoors and attacked by a giant serpent.  Instead we're still in the same white room.  There are no hit tunes in this opera, but there is a very nice hunting chorus with horns.  This is Weber, after all.

The scene changes, and the hospital bed is back.  This production explains nothing.  Eglantine is marrying Lysiart, who appears to love her.  They sing about roses, but the flowers appear to be lilies.  Eglantine is killed, and Euryanthe marries Adolar.  Emma goes to her rest.

The women have all the fun in this opera.  The villain is a woman.  Small people with evil passions, but good wins in the end.