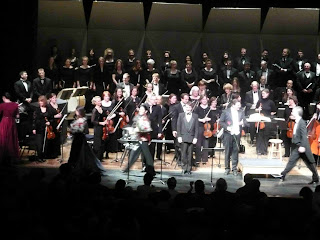 I went to Rossini's Bianca e Falliero at the Washington Concert Opera Sunday. I now know what it's about, so maybe I should watch my DVD again. It's a standard operatic thwarted love plot, but has a few interesting features.

There was a very nice quartet toward the end where the four main characters stand and tell their personal thoughts that reminded me very much of the canon from Fidelio. There were some lovely love duets between the title characters, sung by Anna Christy and Vivica Genaux. And the whole thing ended with "Tanti affetti" with different words. It worked the first time, so why not try it again? It worked for me since it is some of my favorite Rossini.

The plot was not at all ridiculous. Bianca's father wants to marry her to a rich guy so he can have more money. Bianca is in love with a military hero who may not be particularly rich. Falliero is caught escaping from Bianca's house through the grounds of the Spanish embassy and is charged with a capital crime: consorting with foreign ambassadors. Bianca saves him, and they live happily ever after.

I went to see Vivica Genaux, who I think is perfectly marvelous. Someone came out before the performance and said she was having an allergy attack, but she was great. She had a very nice rage aria toward the end when she thinks Bianca has married the other guy. She is golden. I went back to say hi, and as usual thought of nothing very creative to say. Maybe if I practiced I could get better at it.

This is an interesting group, though the orchestra could have spent more time tuning. Next year they are doing Donizetti's Maria Padilla.
Posted by Dr.B at 10:35 PM