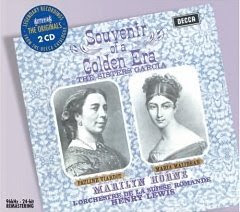 I remember the first time I saw Marilyn Horne. She appeared in a duet as part of a long black and white program about Joan Sutherland. "Forget her. Who is that other one?" I thought. Marilyn was my kind of voice, and I have admired her for many years. People my age generally remain devoted to the musicians of their youth, so theoretically I should love Marilyn as much as ever.

I have a vinyl recording of her "Souvenir of a Golden Era" two disc CD recently re-released by Decca. She wants to get in on this Maria Malibran thing, too, I guess. I see that this recording was also produced by Christopher Raeburn, and perhaps the Garcia sisters represent a personal enthusiasm for him. Disc one is repertoire of Maria Malibran, and disc two is repertoire of her sister Pauline Viardot.

Though Marilyn began her career as a soprano, no one would suggest she was one. She has steel in her voice that makes it perfect for things like "Se Romeo t'uccise un figlio" from Bellini's I Capuleti e i Montecchi. She was simply the perfect voice for bel canto male mezzo roles.

But if we were to imagine her as a soprano, it would surely be as Leonora in Beethoven's Fidelio. She makes a very convincing dramatic soprano here in her performance of "Abscheulicher."

Bartoli would never touch this. Nothing from the album Maria appears here. If you want to compare Horne and Bartoli, I suggest "Assisa a piè d'un salice," the Willow Song from Rossini's Otello.

Marilyn's album is enormously varied and shows off the great versatility of both herself and the sisters Garcia. She seems to be deliberately placing herself in opposition to Bartoli, inviting comparison.

I cannot put back the clock to before Bartoli. I now hear bel canto through ears filled with Bartoli's phrasing. Perhaps it would have helped Marilyn if she had chosen an Italian conductor instead of her husband Henry Lewis, an American. Marilyn is best in the heavier roles Bartoli does not attempt. In her incarnation as General Horne she is unmatched. Why is it that I never went mad for Marilyn? She inspires in me enormous enthusiasm, admiration and respect, but perhaps not love.

Here she is in an aria from Les Huguenots. Maybe it's time I got into Meyerbeer. Her life in music opened up her style enormously. I feel like such a cad criticizing anything about Marilyn, but she definitely got better as she went along.
#ad