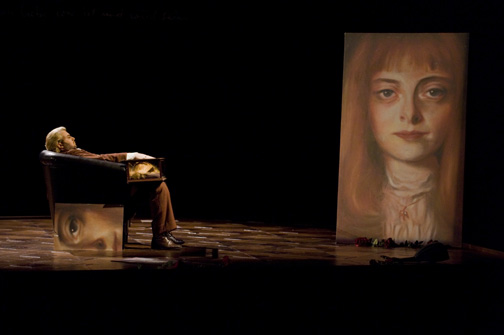 Erich Wolfgang Korngold (1897 – 1957) wrote Die Tote Stadt (1920) when he was very young. For my ears it is very neo-Wagnerian. I hear a lot more Wagner than Strauss. I saw it last night at the San Francisco Opera for the first time.

I was explaining to a friend while on the way to tote Stadt my "opera is a chick flick" theory (Bonesetter yes, Traviata yes, Manon definitely, there's even a bit of the chick flick in Simon Boccanegra), and he objected to the idea that Wagner operas were chick flicks. So the question is is Tote Stadt a chick flick? It's sort of a neo-Wagnerian horror movie chick flick. The music is a throwback but the plot is very twentieth century.

Man meets woman who looks just like dead spouse. Man dreams she is a low life theater person who sleeps around, including with him, and strangles her with dead wife's hair which he keeps in a box. Which appears in dream as a religious icon--perverse. The dream sequence is filled with religious imagery. In real life she is an ordinary woman, probably quite nice, who sings a song with him. 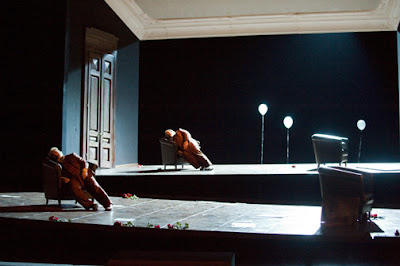 It's weird but has a sensible ending--he leaves Bruges, the city of the dead (In the Bay Area the city of the dead is Colma. All San Franciscans are buried there. They probably don't mean that, but what do they mean?) and goes back to wherever he came from. The production was from Vienna and was quite nice, though not always entirely visible from the balcony. Willi Decker directed--same guy who did Netrebko's Salzburg Traviata. The new screens in the balcony area help with visibility.

The orchestra with Donald Runnicles conducting played this music beautifully. They were the stars.

All of these people were quite good. Torsten Kerl is a German Heldentenor and has recorded this work with Runnicles. Emily Magee trained in the United States and sings Wagner in the European houses. She has a big voice with excellent dynamic range.

Special mention must go to Katharine Tier, an Adler Fellow, as Brigitta. She sang very well and gets to be crucified in the second act.

I am finding this article about Die tote Stadt interesting. Not the stuff about the parallel to the Pre-Rafaelites which may or may not be valid. The period is sort of right, and it's true, the hair of the lady in the painting and the hair in the production go together. Is that hugely significant? No, my interest was in the idea that the happy ending weakens the opera. It isn't exactly happy, after all. He just decides he would rather not be an obsessed idiot. I have reached the age when I wish I had not been an obsessed idiot, and had paid more attention to what was going on around me.

The idea is that our hero Paul needed a Liebestod to give the opera its proper force. He could still decide not to be an obsessed idiot, but he could do it with a lot more dramatic significance and operatic style. Such a Liebestod would have to be to the dead wife, not the living woman who looks like her. It would be sort of a "bye, sweetie--I loved you, but I have to go on living now" sort of thing. Not very significant or dignified or acceptably masculine.

I think Korngold was attracted to the perverse parts of the story and deliberately emphasized them, particularly the anti-religious religious symbolism. In the twentieth century it is perversion that attracts us. Schoenberg had a grandiose scheme about the character of God in mind for Moses und Aron, but quickly lost interest once the perverse parts were over. Berg's widow tried to protect her dead husband's reputation by suppressing the more perverse parts of Lulu. These were the things people thought of as opera at that time.

I think Korngold was a child of his era--the era of the early twentieth century, not the era of the Pre-Rafaelites--even if his music goes all the way back to the 1870's for its style. Once the hero realizes it was all a dream, he wants the end to come quickly.

Would I travel out of town to see this opera? Probably not.