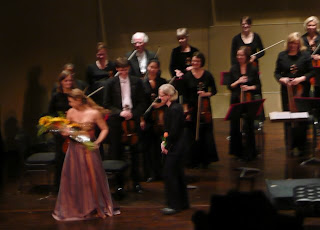 "On October 4, Isabel embarks on a North American "Remembrance Concert Tour" featuring the music of Armenian composer Gomidas, and dedicated to victims of all genocide. This tour is generously sponsored by the International Institute for Genocide and Human Rights Studies."

This tour began at the Herbst Theater in San Francisco on Saturday night and is timed to follow the release of Isabel's album of songs by Gomidas Vartabed. Isabel was born in Lebanon of Armenian heritage and moved to Canada as a teenager. She has one foot in each world: the world of Armenian music and the world of Western classical music.

Gomidas Vartabed was an ethno-musicologist much like Bartok and traveled throughout his country gathering music among the people. It is not clear to me if I am hearing almost but not quite classical arrangements of Armenian pieces or compositions. Armenia is a Christian enclave surrounded by Moslem countries.

Isabel is accompanied by the Manitoba Chamber Orchestra, conducted by Anne Manson. Apparently I saw her conduct at Glimmerglass, though I don't seem to have mentioned it in my review of Orphée. This group consists entirely of strings, in this concert augmented occasionally by Isabel's husband, Serouj Kradjian on piano and Hampic Djabourian on duduk.

Duduk (pronounced like someone from the Bronx saying "the duck") is a double reed instrument about the size of an oboe but with much wider reeds, producing an unexpectedly soft, sweet sound.

To make a full program it was filled out with Bartok from Hungary, Gideon Klein from Czechoslovakia and Nikos Skalkottas from Greece and with "Deux mélodies hébraïques" by Maurice Ravel, all classical settings of music from various eastern European or middle eastern ethnicities. The concert began with a string arrangement of Romanian Folk Dances by Bartok. Of the sections for orchestra alone only Greek Dances by Nikos Skalkottas was not arranged.

I liked Anne Manson and her ensemble a lot. All of Ms Manson's movements on the podium are large and dynamic, though she did not seem to distract from the deeply serene Isabel. Isabel is aiming for authenticity and with her orchestra she generally achieves it. All this music is ornamented in a style that is beautiful but not at all Italian.

Isabel Bayrakdarian has her own sound and her own style, somewhere between soprano and mezzo-soprano, and is generally a fascinating singer. If her tour comes to your city, be sure to attend.