Herbert Breslin and the King 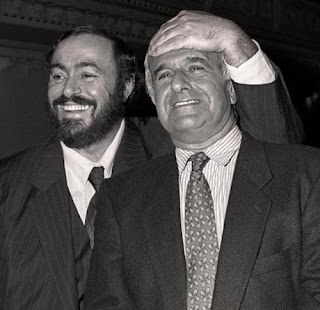 Herbert Breslin (October 1, 1924 – May 17, 2012) died recently, and this stimulated me to read his book called The King and I, a book about himself and Luciano Pavarotti. Pavarotti and Breslin had split in 2002 over the divorce after working together since 1967, so Breslin wrote the book with Anne Midgette.

He advises not to look too hard for the next big thing.  He didn't like any of this generation's tenors and seems not to have noticed Jonas Kaufmann.  Germans are not supposed to count.

It's interesting to read about the early years of Pavarotti's career.  It was another world, one in which Americans still purchased recordings of people singing classical music.  If I wanted to know the details, I could read one of Norman Lebrecht's books: Who Killed Classical Music?: Maestros, Managers, and Corporate Politics or The Life and Death of Classical Music. By "Classical Music" he means classical recordings. The music itself seems to go on.

We sort of suspected that Pavarotti was more interested in the money and fame than he was in the music.  I personally think that his musical creative process was intuitive and based on the place of classical music in his childhood.  Breslin seems to have a similar opinion.  I get annoyed with Pavarotti's disinterest but then remember the incredible late recording of Manon Lescaut, probably my favorite Pavarotti.


There's a great anecdote of Pavarotti eating about a kilo of caviar and getting very sick.  You had to be there.  My sense of Pavarotti is that he was all of a piece--you simply cannot separate his personality from his music.  Everything flows out without any kind of inhibition.

I can't actually recommend reading this.  It's well written and interesting, but one might rather not know.  It descends, like his relationship to Pavarotti, into nastiness.

One interesting feature I've never seen in a biography before is long quotes from most of the concerned characters.  And pop star Pavarotti was the invention of his second wife Nicoletta.

This is the only Ernani I ever care to hear.

I was fortunate enough to snag a review copy of this book, which was a pre-pub paperback that hadn't yet had all its copy edits cleaned up. Nonetheless I found many of Breslin's stories interesting, although clearly self-serving, but that's the advantage an author enjoys -- sort of the same way the victors write the history books.

The one thing that still surprises me is the brief discussion of Pavarotti's recording of "Otello" with Te Kanewa and Georg Solti (Chicago Symphony0. Breslin describes it as [paraphrasing] one of the most egregious uses of post-production fine-tuning in all of recorded opera. I've always considered it to be a gem of a CD, so maybe my ears aren't as good as I thought?

Hi Paul,
There are some live clips of this concert on YouTube. Since you are familiar with the recording, play them and see what you think. Sounds great to me. LP required a prompter, this is well known. That's what the box is for.

As far as Breslin goes, I think he should have waited a couple of years to write it.