Me to seat mate at John Adams' Nixon in China dress rehearsal:  This is minimalism.
Seat mate:  I don't mind the minimalism, but do they have to play the same notes over and over?
Me:  That's what makes it minimalism.  [Pause]  This is actually a much shorter opera. 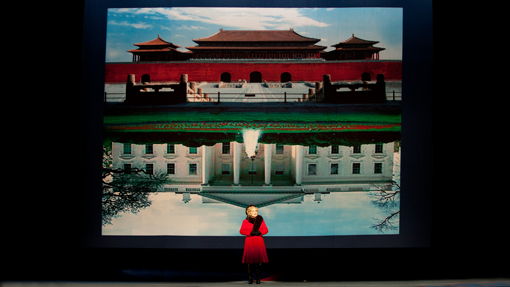 Hye Jung Lee is the best Madame Mao ever.  She puts it out there, making the character the complete bitch you have always wished for.  In this version she appears in the last act with Mao.  I don't remember that happening before.

It is the words that make this opera completely extraordinary.  The Americans and the Chinese stand talking to one another, but it is clear that neither knows what the other is talking about.  All the memorable lines come from the Chinese.  "The people are the heroes now."  "Founders come first, then profiteers."  In fact, they seem to speak always in aphorisms.

The new production was not so literal and looked only approximately like the historical events. 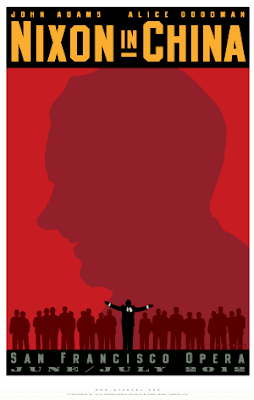 The first two acts are terrific.  The third act is improved but still makes the opera peter out into dullness.  Mao dances.  I noticed that one section of the second act ballet sounds a little like Wagner.

This was a rehearsal, and the action completely stopped after Madame Mao's aria so the director could criticize a part of the scene.  To fill the time the orchestra played the ending of Das Rheingold.  I think they miss The Ring.
Posted by Dr.B at 4:28 PM

Probably there is a section of Nixon that sounds like Rheingold. That's my excuse.