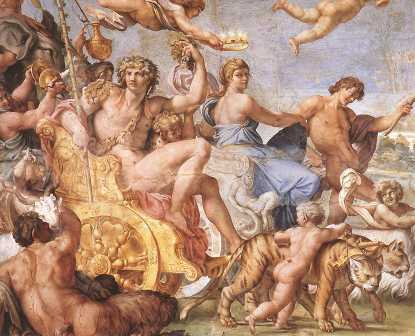 This picture in a somewhat wider and more decrepit version is the decoration for Act II of Tosca at the Santa Fe Opera.  Its title is "Triumph of Bacchus and Ariadne" by Annibale Carracci, and it is indeed in the Pallazzo Farnese in Rome.  Only there it's on the ceiling while here it's on the wall.  A lot of that sort of thing goes on in this production.  (Please note the tie-in to Dionysus in King Roger.  This cannot be a coincidence.) 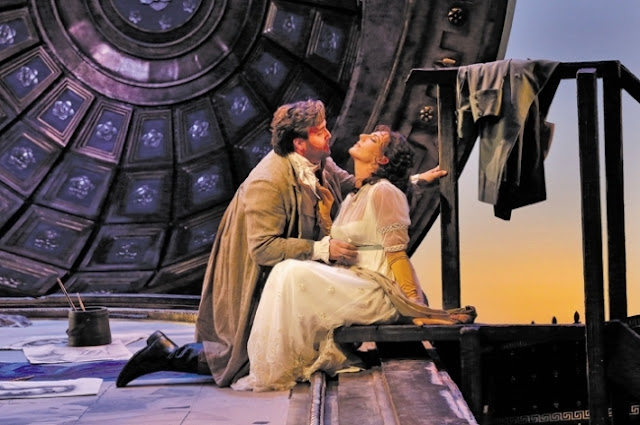 This shot shows the inside of the church dome with Cavaradossi's painting lying on the floor for Act I.  People walk all over it.  Bizarre.  And who are these lovely people?  Brian Jagde sang Cavaradossi and  Amanda Echalaz was Tosca, both big soaring, romantic Puccini singers.  Amanda was best in the intense scenes, and I liked very much her "Vissi d'arte."

Brian is a replacement for the arranged singer.  I knew the name sounded very familiar.  He has been an Adler Fellow for 3 years, and he just won Operalia (I even managed to remember this.)  He needs to work this role into his voice more completely before he sings it in San Francisco in November.

The third person in this production was Thomas Hampson as Scarpia.  He is very sophisticated and casual about his evilness.  A lot of women think Hampson is very handsome, so what exactly is Tosca's problem?  We may never know the answer.  He died with a lot of flailing around.  He was booed in the bows and made a comical gesture--Moi?

Opera productions of the most popular operas become like established rituals.  The picture hangs here, Scarpia dies here, Tosca jumps here, but occasionally it is interesting to see something slightly different.  It is nice not to have to explain the opera.