"I cannot remember any German sentences" 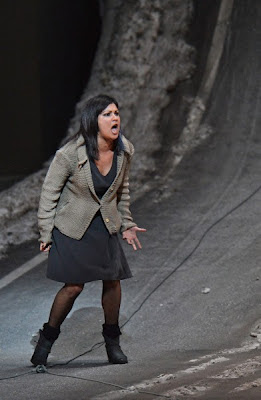 [This interview is translated from Die Welt.]

The best known soprano of today is in October on an eleven-city tour: Anna Netrebko about paparazzi, difficult German phrases and singing at the sausage stand. Manuel Brug

Anna Netrebko has taken on a lot for the fall. She has just recorded a Verdi album, in September she opens the Metropolitan Opera season with the "Elixir of Love", in October, she starts a spectacular tour of eleven cities with Tchaikovsky unknown "Jolanta". Now she is in Salzburg, where ten years ago it all began for her, quite summery relaxed forward and backward.

Die Welt: Can the Anna Netrebko of 2010, the sovereign Puccini-Star of Salzburg's "Bohème", remember the young Anna Netrebko that in the same place in 2001 sang Donna Anna?

Anna Netrebko: You mean because Salzburg meant my European breakthrough? Of course, but she does not think constantly about it. I'd rather look forward than backward. At that time I was a spontaneous girl who could try out many things. Today I am a woman of 41 years, with a child and a partner.

Die Welt: A woman of 41 - that sounds so pathetic.

Netrebko: I am an opera singer, there everything is pathos - no, of course not everything. But today I must remember my actions and desires, the whole career strategy much more. I can scarcely afford errors any more. Nowhere am I alone any more. All the world is watching, even if I am at Petersburg's Mariinsky Theatre, where I was with my old friend Valery Gergiev, I still feel very safe to try out something new. And if it should not be good or optimal, it means that Netrebko can no longer, she is in crisis.

Die Welt: And how does Netrebko feel currently in Salzburg?

Netrebko: Very good. Although it is happening again. You have shot me down. Here I am the target of paparazzi, but only in these four weeks of the year! Luckily I'm not a pop or movie star, I could not stand it. Here I will be monitored the town is so small, but I have again in Vienna or New York peace and quiet. Ten years ago the then Anna is still blithely swept around in denim skirt on a bike here. Today someone would pull me down. During rehearsals I wanted to have my rest, so I'm never on the street, and as Erwin then came at last, and we went together before the premiere to the Festspielhaus, I totally focused, without makeup, and he somehow looked somewhere else because of the lurking photographers. "Erwin and Anna, the crisis", it was then again in the newspaper. We laugh about it still, we do not care. Once in a while we consciously go to artist triangle bar opposite the Festival Hall, where one can see us, take pictures of me. This is a service to the public.

But I live this year since the premiere in Fuschl outside the city, because here I am protected. Now I just have to go to Salzburg for the performances. And I commute frequently to Vienna. Because my son is now four and in kindergarten. I want him to tell me his experiences personally and not only via Skype. This is important.

Die Welt: How does Anna Netrebko feel as Mimi?

Netrebko: Still wonderful. The role grows and ages with me. Unlike the frivolous Musetta, she is definitely away, filed, that was the earlier Anna, I have grown out of her dress. Just as now with the dress of Donna Anna, with whom I became well known here, or from the Massenet-Manon. The coloratura Girlie is past.

Netrebko: Oh, it's already out? I've got to have that! Yes, that was a very funny photo session with my personal wardrobe, very colorful. But this is also a shield that deflects. And I'm born in Russia, naturally that is why I have Bling Bling in the blood, that I cannot and will not deny under any circumstances!

Die Welt: Where is Anna Netrebko going until she is fifty?

Netrebko: Further in the opera. Definitely. But really that long? I need my life to plan ahead six years. Sometimes it makes me shudder. You have to have the courage to revise things and to cancel.

Die Welt: Just as your Traviata at the Metropolitan Opera?

Netrebko: I no longer was that. The girl in the red dress from Salzburg 2005? Past. I did not want to compete with my own image that anyone can recall with a CD, DVD or YouTube. But Mimi has a beautiful soul. The singing is pure joy. I especially like the third act at the sausage stand in the new production, which is pure atmosphere, nothing distracts them, I feel this very intensely. But of course, I told the director, I am no longer a young mother, I have to be credible, even in costume, so please do not be punk.

Die Welt: Are you happy with yourself?

Netrebko: Already. Otherwise I'd go crazy. Of course I'm ambitious, performance-aware. The demands of the people from me. But today I am more generous about errors, also in others. It happens, it's human. One should not make a tantrum, it goes on.

Die Welt: Are you a good partner?

Netrebko: I think so. I can react instinctively, that fires off some tenors really. And I like being part of an ensemble. Because so much is flowing uncontrolled, spontaneous energy. We are moving in a note corset, but never know where it will carry us, that's great, then I'm hooked. In an ensemble it is salvaged, one can divert attention, must not carry all the evening oneself.

Die Welt: Does your voice still surprise you?

Netrebko: And how! I think I know it, and then there is always something unexpected. For example, I wanted to try out Lady Macbeth for my new album with Verdi arias, which we have just recorded. She is cruel, brutal, completely away from me. She lies deep, but one must also sing very high. Verdi was known to want to hear ugly, harsh tones from her. We have tried this and it worked, especially in the mad scene. I looked then into my depths. And was surprised.

Die Welt: Do you learn quickly?

Netrebko: It depends. With German, for example, I find it really hard, and as a naturalized Viennese! Not so much with words, but with grammar. I simply cannot remember German sentences. And I can learn new roles only when I sing nothing else. To stand on the stage with Puccini and at the same time memorize Verdi - not with me.

Die Welt: And when will you learn your first "Lohengrin"-Elsa?

Netrebko: Huh, yes, the contract for 2016 with Christian Thielemann in Dresden is signed. And I have already fixed my six weeks off where I will learn it. Then hopefully they will be surprised by my German.

Die Welt: Thielemann conducts this Wagner opera and 2018 in Bayreuth. With Anna-Elsa?

Netrebko: Never shalt thou inquire of me ... if it works in Dresden - I exclude nothing. And Thielemann wants me to sing more Strauss, so I already have the scores for the four last songs.

Die Welt: Are they more funny or more tragic?

Netrebko: Both. Just as life is. Comic roles are more relaxed, even though you must be very precise. I love to be the Adina in "Elixir of Love", which is superficial and easy, but with a lot of heart. And keeps my emotional budget in balance. I love also the blind Jolanta by Tchaikovsky, which at the end will see again. That is a short opera, but beautiful and full of light, in a figurative sense, as in the present. That gives me a lot of positive energy, for several weeks now to go on tour with this figure, this cheers my autumn enormously.

Die Welt: Have you given it before? A singer in an Eleven Cities Tour, as the heroine to a really wide audience in a totally unknown opera?

Netrebko: I myself am totally surprised by the enthusiasm of the organizers! But it's also great. I love this opera, it has staged wonderfully in Baden-Baden and a concert in Salzburg. And now they all want to hear it again. Some may also be because of me, but if I can do it, bring this absolutely listenable work to so many people, for which I am enormously grateful. A "Traviata" or " Bohème " you can always play without me, but if I can entice people to this Tchaikovsky, wow.

Netrebko: I do not know yet. There's a lot of energy. But I don't have to push anything. I don't have to do everything, the way I definitely did too much in the beginning and not always correctly. But it has overtaken me, and you have to first learn defenses. The roles, if one is on them, protect one wonderfully. You dress up, you can find in them a public self that stands in a long tradition.

We singers are always comparable. That is why it is so important that you develop yourself, that you realize your potential, and that one at the right time says Goodbye to a role or waits longer for it. As I have now waited a really long time on the Tatiana in "Eugene Onegin". It will be the highlight of my Russian repertoire - the first time next April in Vienna. Deliberately not in a new staging. [Bewusst nicht in einer Neuinszenierung.] I want to grope my way gently to her. I will be in the spotlight so anyway ... But I probably would miss it if it were not there.

Netrebko: Clear. And I want to be prepared. Opera is wonderful, and the business is so good, but I would not like to miss life - and it does not always have to defer to a later date. Then I must certainly bring a hundred percent performance to the stage, and I want to do it. Even for ones own psychic economy. Afterward I can really pull off the role like a costume and then I usually go home. I will party now less. Because I am a woman of 41 years! I know it.
Posted by Dr.B at 12:51 AM